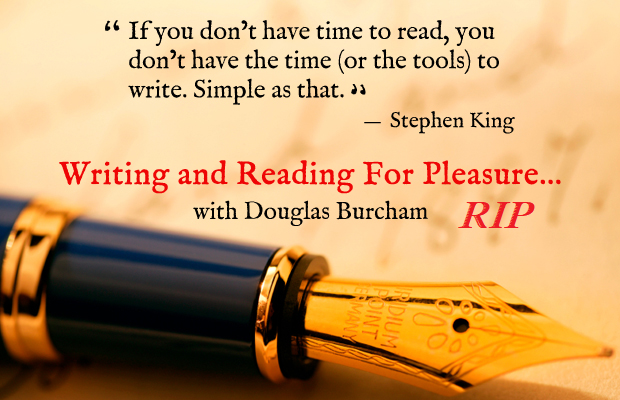 Way back in 2014 I met Douglas at a writer conference in Leicester, England. I was enthused by his energy and his enthusiasm for writing. Like so many writers in the indie scene, he came to writing late in life, but with a burst of energy and ideas like so many authors who had suppressed a passion deep within them.

By 2015, Douglas and I had come up with an idea for TIPM. He became my first ever guest post writer and within months worked and formulated his regular Writing and Reading for Pleasure articles that appeared on TIPM. Over the years they began as monthly pieces, but with oncoming health issues, by 2018, we agreed that it should switch to a post every six months.

Douglas was always committed to passing on his experiences of the writing world, whether to young or old. Bursting with ideas of fantasy fiction and books on history, his only regret was that he did not take on this passion earlier in life. Much work to be done and completed.

From his last ever Writing and Reading post in a very reflective piece:

On 1st June 2020 I celebrated being a writer for ten years. Writing is not a short-term activity. The first three years – a million words of draft modern fantasy fiction and then five years of not enjoying editing and improving these towards a final copy. But also, enjoyably, more new draft fiction words, then enjoyment again from writing some non-fiction and short stories.

In my innocence of things to come I drafted but did not complete a TIPM post as usual in December 2019. This reflected how the writing year had been a different one than I predicted twelve months before. I have brought forward some of that post into this one making it rather long – two posts in one. This post is probably my last on writing fiction especially because I have banged on too much about the subject for too long on TIPM.

Along with many other people, I did not notice late in 2019 the reports of a new virus in Wuhan China which would have the potential to ruin countries, cause undue misery and end lives worldwide so catastrophically in 2020.

In the last 18 months I have produced a non-fiction book on buildings, started another in January 2020 on climate change, and since March 2020 I have transferred my efforts to an as it happens experience of history being made by the Coronavirus. The latter until a vaccine arrives or it gets me with underlying conditions, whichever comes soonest. You know from previous posts that after learning by doing in self-publishing in 2013 a small short storybook – Ywnwab – I decided the publishing process was too much like work. I was supposed to be semi-retired. I therefore carried on writing and reading for pleasure.

I reflect now I probably decided against going on the publishing road in 2010. This was after reading the publishing section in the 2006 edition of the Helen Corner and Lee Weatherly’s Teach Yourself book on writing a blockbuster in late 2010 and listening to my first book editor Gary Smailes of Bubblecow.

I understand lockdown has produced a surge in new writing and publishers have been overwhelmed. I have given over the years in my TIPM articles a view from my own experiences of the writing process. Here, I now reflect on these views after ten years.

How right he was. It did prove to be his last post with increasing illness.

Douglas has left us and this world. He leaves some inspiring advice and words of wisdom for young and old writers. (RIP)

Douglas Burcham started writing on 1 June 2010 and self-published under the Allrighters’ name a storybook ‘Ywnwab!’ in September 2013. A million words of draft writing reached satisfactory completion in January 2014 split between 900,000 words of fiction and 100,000 words of non-fiction. The latter being about writing and memories of buildings, trains, boats and planes. Since then after a slow and aimless start to 2017 better progress continued to be made into 2019 in converting draft writing into final manuscript proof printed up copies by Doxdirect ready for potential publishing. These as short and long storybooks under the Allrighters’ name. He has written at least another half million words since 2014. He contributed a regular post to TIPM up to June 2016 and has carried on at intervals since. After writing his first non-fiction book in 2019 he is writing an “as it happens” book on the Coronavirus pandemic. He updated his website www.allrighters.co.uk at the start of 2020.