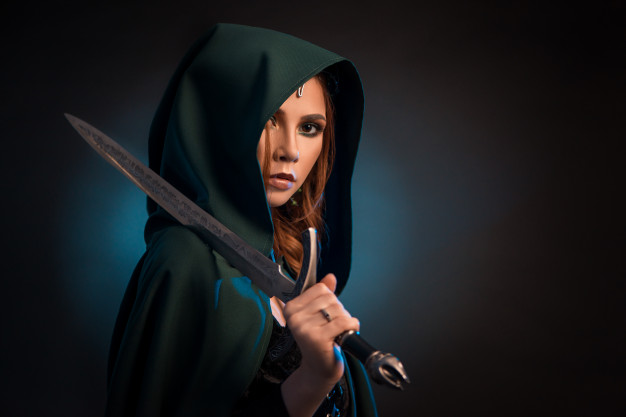 Make her strong in different aspects

Strong female characters are strong in a number of aspects. Their strength does not only come from a single source or manifest in a single attribute. They are strong physically, mentally, and emotionally. In other words, physical strength is not everything. It should not be your sole basis when creating your strong female character. Your female protagonist does not necessarily need to have the biggest muscles or the most flexible joints just to be considered strong. Sometimes, even the most heavily built character can be knocked down by a quick-witted and tactical enemy. So, if you want your female character to be genuinely strong, give her different kinds of strengths. Give her confidence and wit. Make her enduring and resilient. Let her be the kind of character who does not only combat bulky enemies but also stands up for her beliefs and values even when no one else is listening. An example of a female character who is strong in different aspects is Elizabeth Bennet from Pride and Prejudice. Despite all the social pressures she faces, Elizabeth Bennet is portrayed as a woman who protects her family, speaks her mind, and marries for love. She knows what she wants and what she believes in.

Give her complex emotions

Women are generally perceived to be emotional human beings. Even though some people consider it offensive, being emotional is actually not a bad thing. When it comes to building characters, particularly, emotions are very necessary. Vulnerability and emotional depth are fundamental characteristics of strong characters, regardless of gender. As mentioned, the strength of strong characters does not only come from a single source. It is not only manifested in their physique and intellect but also in their ability to process and manage their emotions. If you want your female character to be considered strong, you need to give her complex emotions. Make her complicated and unpredictable. Allow her to be vulnerable and deep. When the situation requires her to grieve, let her be in grief. When the situation demands anger, let her be angry. When the situation naturally calls for fear, let her be frightened. In other words, allow your female character to experience a complex range of emotions that human beings experience in real life. An example of a strong female character with complex emotions is Fannie Fern from Ruth Hall: A Domestic Tale of the Present Time. Fannie Fern is portrayed as a hugely successful woman who broke down barriers in publishing by being an early female writer. Behind this image of an accomplished woman, however, Fannie Fern is a sentimental wife whose grief allowed her to succeed and bring honor to the grave of her husband.

Allow her to have flaws

Strong female characters are not necessarily impeccable characters. Just like everybody else, they have flaws and imperfections. Flawlessness and impeccability do not measure how strong a certain character is. So, instead of trying to turn your female character into a paragon of perfection, allow her to be relatable and empathetic by giving her flaws. Make her awkward and clumsy. Give her fears and worries. Let her face a series of challenges and problems. In other words, do not turn your female character into a princess in a fairytale. Let her be a representation of strong women in real life. With that being said, give her a meaningful character growth. Provide a room for your female protagonist to grow from her mistakes, weaknesses, and imperfections. Let her develop physically, mentally, and emotionally. A strong female character does not allow herself to be stagnant. She is dynamic and always willing to improve. An example of a strong female character with flaws and weaknesses is Tris from The Divergent Series. Her character is filled with fears, such as fear of becoming powerless and fear of not being able to escape. Nonetheless, despite them, Tris never showed any sign of cowardice. She is an immensely strong character who is willing to do everything to save the people that she loves.

Set a profound goal for her

Strong female characters are goal-oriented. They do not just do things on a whim. They are always driven by a purpose or a profound goal. A goal is an essential element that every strong character must have, regardless of gender. This goal serves as the impetus that propels a character to act and journey the unknown. The bigger and more profound the goal is, the stronger your female character needs to be to achieve it. In other words, the size and profoundness of your female character’s goal somehow determine how strong she can be. So, if you want your female protagonist to be an immensely strong character whom people will look up to, then set a profound goal for her. Give her a big, memorable goal that will set her actions and intentions in motion. Such goal does not necessarily have to be as grand as saving the world from alien invasion, but it has to be meaningful enough to make a difference in the life of your female character and the people around her. An example of a strong female character with a fervent goal is Jo March from Little Women. Jo March is a brilliant and dauntless character who refuses to conform to the gender norms that limit women in New England during the Civil War era. She is a passionate and independent woman who worked hard to achieve her goal of gaining literary success. In essence, her fervent dream of writing books is what set Jo March different from all the other women during their times.

Jennifer Jacksons is a professional writer and amateur photographer. She writes for the ReadersMagnet during the day and goes on photo walks at night. She is a travel enthusiast who loves to take photographs of people and write stories about cultures. Aside from writing and photography, her other interests include painting and cooking.