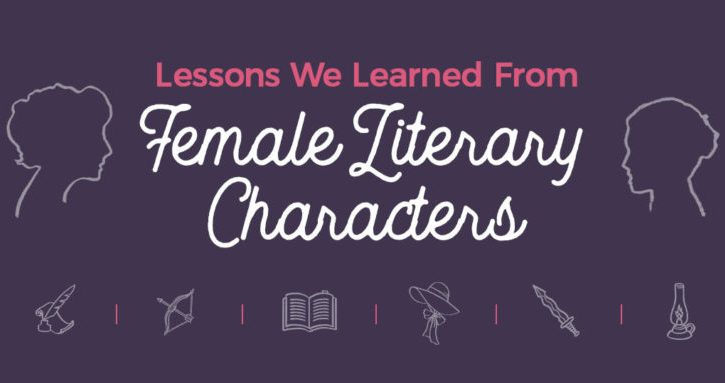 Whether they’re delivering sick burns to unwanted suitors, surviving unbearable conditions against all odds, sticking to their values in the face of harsh opposition, or smashing the patriarchy with their legit goddess powers, it seems like there’s nothing these female literary characters can’t do. And, because life is like that, you can bet these literary characters are doing it in less comfortable clothing than their male contemporaries too. Check out these kickass female characters and the important lessons they have to teach us.

My courage always rises at every attempt to intimidate me.

Bold, fearless, strong, an excellent reader, and a loyal sister. There is no shortage of qualities to love about one of Jane Austen’s most famous female characters, Elizabeth Bennet. In Pride and Prejudice, Lizzie is a formidable defender of her family, she champions the downtrodden (well, at least people that she THINKS are downtrodden, ahem Wickham), and she fights hard for her own happiness.

Neither the temptations of wealth and prestige nor the intimidation of scary aunts like Lady Catherine de Burgh can shake her from her convictions. And if you didn’t already want to be her enough, she gets to marry Mr. Darcy and live in Pemberly. Sold.

2. Beatrice, Much Ado About Nothing

I had rather hear my dog bark at a crow, than a man swear he loves me.

-Shakespeare, Much Ado About Nothing

The Shakespearean comedy “Much Ado About Nothing” contains some of the best zingers in any of the Bard’s plays, and many of them belong to the cruelly clever Beatrice. She and Benedick start out the play engaged in brutally savage repartee (of all the Shakespeare literary characters we’d like to see on Twitter these two win), but by the end of the play, their friends have successfully tricked the two former enemies into falling in love with each other.

She’s a female empowerment superhero not only because she is brilliant, unapologetic, and brave, but also because she refuses to put up with any man who doesn’t recognize these as her best qualities. Go Beatrice.

3. Hua Mulan, The Ballad of Mulan

–The Ballad of Mulan

She may or may not have been a real living person, but the legend of Mulan has existed for over a thousand years (the legendary Mulan would have likely lived sometime around 420 and 589 CE). In the legend of Mulan, the army calls on her father to fight but she is worried that he is too old and that her brother is too young to survive battle. So, she flouts tradition, puts on her father’s armor (we won’t touch on the potential body image crisis she had when it fit), and joins the Chinese forces in his place disguised as a man.

Over the next twelve years, she wins many victories in the army and achieves great distinction. When the emperor wants to reward her for her service, she tells him all she wants from him is a camel so she can ride home to see her family.  She not only proved her bravery and worth by fighting in the army, she also proved it by simply joining the army and defying social pressure in the first place.

Over the shadowy hills and windy peaks she draws her golden bow… and sends out grievous shafts.

In Greek mythology, Artemis was Zeus’s daughter and the badass goddess of the hunt. She was associated with the moon, childbirth, wilderness, the Amazons, and with maidenhood, since  she herself was a virgin who scorned the company of men (which makes her a very confusing goddess of childbirth IMO) .

She was so committed to her chastity that in one myth, when the hunter Actaeon saw her bathing nude in a sacred pool, she turned him into a stag so he couldn’t bear witness to what he saw (he was then promptly devoured by his own hunting hounds, geez Louise).

Alice had begun to think that very few things indeed were really impossible.

Alice in Wonderland was written by the British author (and mathematician, oddly enough) Lewis Carroll during the Victorian era. In Victorian times, gender roles were pretty inflexible, and females were supposed to be meek, compliant, mild, and content with life in the home (read: a real snoozefest).

His protagonist, seven year old Alice, did not conform to these notions about how little girls were supposed to behave however. She was a curious adventurer who faced her fears and used her brain to overcome obstacles. Sure, the whole thing may have been a dream, but conquering the scaries that live in your subconscious is no mean feat. We’re still very impressed.

I am no bird; and no net ensnares me; I am a free human being with an independent will.

Jane Eyre was an orphan who grew up being punished for her bold honesty and sense of justice. She faced hard home after hard home, but she survived her cruel aunt and the abusive girls’ school that her aunt left her in with her independent spirit and moral fortitude intact. When she grows up, she works as a governess, and she falls in love with her employer Mr. Rochester, an older man above her station who is plagued by a troubled past.

He falls in love with her as well, but before they can marry his serious baggage (i.e., his current wife who he has imprisoned in his attic) prevent their marriage and future happiness. Through the dark trials, through estrangement, and through crushing grief, Jane stays true to herself and maintains her sense of self-worth.

7. Scarlett O’Hara, Gone With the Wind

I’m tired of pretending I don’t know anything, so men can tell me things and feel important while they’re doing it.

-Margaret Mitchell, Gone With the Wind

Fiery, selfish, brave, and an unstoppable force; Scarlett was a powerful woman. Gone With the Wind traces Scarlett’s journey from a petulant debutante to a crafty and indefatigable war survivor. Granted, she’s far from unproblematic. She owns slaves, manipulates ruthlessly, and she chases after the extremely vanilla Ashley Wilkes (to every readers’ extreme frustration).

However, it’s hard not to find her charm, strength, and unfailing ingenuity enthralling, especially because without them, it’s likely none of her family would have survived the war. We see what Rhett sees in her.

Laura felt a warmth inside her. It was very small, but it was strong. It was steady, like a tiny light in the dark, and it burned very low but no winds could make it flicker because it would not give up.

Laura Ingalls is the protagonist in the “Little House” book series. She’s in many ways inspired by the author’s own life as a stoic settler in the 19th century America, which gives her character a rare sense of detailed realism. While today, getting off the couch and walking 10 feet to collect food delivery seems like an inhumane struggle, at 14 Laura was twisting hay with her bare hands to burn for warmth in her family’s cabin and watching her father exhibit symptoms of starvation because the whole town was running out of food. She did whatever she had to do to help her family withstand tremendous hardship. The distance between the couch and the food delivery guys suddenly doesn’t seem so daunting.

Oscar Wilde’s heroine Lady Gertrude Chiltern is a brilliant, progressive Victorian woman who believes nothing is more important than preserving one’s integrity (not even really good tacos). While this makes her a pretty boss bitch, in the beginning of “An Ideal Husband” she is rigidly intolerant of any deviation from the correct moral path; arguably, she takes it a bit far.

However, by the end of the piece, when she’s confronted with flaws in the people she loves best, she grows to realize that some flexibility and tolerance for human frailty is necessary in a world populated by imperfect people. A person with strong morals with the capacity to forgive sounds a lot like role model material to us.

I think I shall write books, and get rich and famous, that would suit me, so that is my favorite dream.

Jo March was a bold and bright young woman who refused to conform to the binding social constraints set up for women in Civil War era New England. While many of the other women in this book complied with the period’s conventional ideals of being mild, compliant, demure, and feminine, Jo was not into it.

She was a fiery and independent woman who bravely refused to conform to gender expectations. By the end, Jo has been rewarded for her intrepid behavior and achieves her dream of gaining literary success and she also finds a partner who loves and supports her for her spirited individuality. Go Jo.

Are you a Pride and Prejudice fan? Because Margaret is basically the Victorian era social justice advocate version of Elizabeth Bennett. So get excited. In North and South, Margaret Hale and her family are forced to leave their home in the idyllic South of England for a harsh and unromantic factory town in the North. When she arrives, she’s dismayed at the levels of wealth inequality and harsh conditions for the poor, so she confronts the brooding and taciturn local factory owner about it. Her audacity and passion make her a total dreamboat in his eyes, but she’s still not into the whole exploitation thing so she rejects him.

However, by the end of the work she realizes in his own way he works tirelessly to improve the lives of the people in his town and she falls in love with him as well. Her willingness to fight for a better world mixed with her openmind make her a character with a lot to learn from.

Spunky, imaginative, and irresistibly fun, Anne doesn’t let her tragic background stop her from being her best and most optimistic self. Anne is an orphan, and when she shows up to the home of the couple that’s supposed to adopt her, she realizes that they were hoping for a boy and not a girl (which probably isn’t too far off how people generally felt about kids during this time— I’m imagining gender reveals for girls accompanied by sad trombones).

Rather than feel defeated or inadequate, she continues to stay positive and fight to prove her value. Many trials ensue and she has a lot to overcome. She has never been taught proper etiquette, nor does behaving demurely and fitting-in come naturally to her, so she (kinda unintentionally) rebels against the status quo. Her creative mind and dedication are eventually recognized, and she is able to prove her worth through academics and through taking care of her adoptive mother. More like, “Anne of Green SLAYbles,” amirite?

Please include attribution with this graphic and source.

For thousands of years, female literary characters have overcome seemingly insurmountable opposition and have inspired us with their indefatigable strength, bravery, and spirit. So next time the (literal) man is getting you down, open one of these books and get to know these wonderful women better. And for people who already know and love them and want to show off their allegiance to these incredible females, Redbubble has literature tote bags, literature posters, and literature tees featuring their awesome quotes, pictures, and fanart.