This is Douglas Burcham’s second post of 2018 in his Writing and Reading for Pleasure series with reflective updates on his productive writing activity this year.

As I have said many times before, my first advice to people I meet who want to write a book is to make a start, set a target and write a few hundred words every day for enjoyment. If one is more ambitious, look at Russell Blake who started writing on 3rd June 2011. He has written and published over 60 books, totalling five million words. He averaged some 2,000 words a day for the whole seven years. He has sold many books as well and has made serious money – rare for most writers.

I will not be repetitive about other previous advice. One issue has been highlighted as I keep the production line going for the conversion of my book drafts into a manuscript and near-complete versions. I have made the point about backups and not being able to sell a book to a publisher or reader if it has been lost or to even read your own writing.

My filing and backup system is certainly not perfect but I reckon I have only mislaid two short stories, I recall writing, but cannot now find. I have often found passages I have lost in different books of mine than the ones I expected to find the stories! The largest hole in my system is when I go on holiday. I work on old files and create new ones and do not always merge these files into my filing system when I return home.

Last June I hoped to increase the number of books I had managed to produce with Dox-Direct’s help in printing to manuscript proof stage. Using Ywnwab! and the GEMINI trilogy as the base, the triangle has grown to the end of November by another eight books – to thirteen, and 1,050 words. 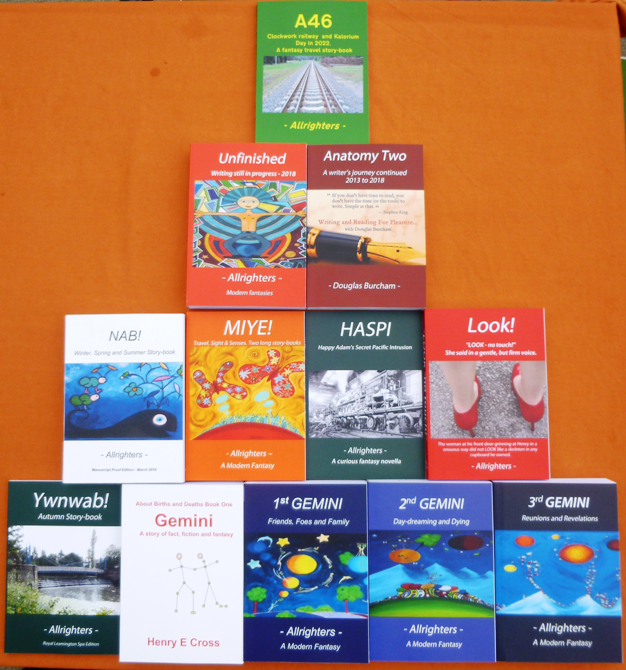 The list of book titles is now as follows.

The word counts for the books range from 16,000 to 139,000 words with an average of 80,000. As previously stated my original target of a million draft words with a daily writing target of 900 words did produce results. Since January 2014, when I completed a million words, I drifted in target less while self-editing and writing some more. In 2018, driven by trying to finalise and produce a book a month with Dox-Direct and process over 500k words for the year, this has produced outputs. New writing has averaged a meagre 650 words a week while detailed self-editing using Autocrat and Style writer, some 6,000 words a week. Reading edits make up some 25,000 words a week, weighted to a quarter for my target.

Reading other books has suffered because pre 2018 I would reckon to read a 100k word book every week. So far in 2018, I have only read about two books a month, including a start to the 585 pages of the EU withdrawal agreement. Yes the UK ex-politicians and civil servant incomes from the EU are well protected from taxation in future and any taxation paid goes to Europe!

When I set out to write, I decided to unload my mind of the hundreds of story ideas I had in my head rather than do one book to death and the final editing before starting another. This has meant I have only on a few occasions experienced writer’s block and I am also amazed at what I have written. Some days I do think the dreadful process of self-editing has blunted my imagination and the power of new writing, only then to surprise myself with another session of what seemed to me to be brilliant new writing.

Just because I have achieved this has not awakened any desire to publish. Indeed, the thought of sensitive editors with red pens removing many pages of my text gives me cold shivers. I am certainly not very hard on myself in discarding text and I prefer to work to improve my writing by changes and writing more. I am a bit of a hoarder and recycler in the rest of my life, so this characteristic has shown through.

Some are repeats. Ywnwab! in A5 size and a print-up of an early version of GEMINI – my first writing efforts – edited in 2011. I ran the book through Autocrit and Style Writer and to my chagrin, a shock! No material difference to readability or major style issues. Why have I been spending so much time refining, I ask myself? I also had an exchange of emails with my first editor, Gary Smailes of Bubblecow. He said he recalls my first book well and has still not found another book as ‘unusual’ as GEMINI.

I am reaching a stage in life now where I am tidying up my affairs, including my writing to die tidily. There is so much to do I will not! I had an uncle who spent the last ten years of his life clearing out. Despite this we had to spend three days emptying his small bungalow after he died. Sadly he had many articles and papers which would have meant so much more to him than us when we cleared the house. I intend making an inventory with history for my most precious and often worthless in value items. Maybe this can be another book. Douglas Burcham’s life history in a hundred objects. The Dox-Direct production process allows this to happen.

When I first started work, two of my more senior colleagues exercised a public guardian role emptying houses where people had died without any next of kin. Sometimes they would spend weeks making inventories of treasure chests of possessions found in some houses. It’s definitely a lost opportunity for an interesting book.

I did think I would put all my books on Amazon in electronic form for posterity. Given Amazon have deleted the page for Ywnwab! without my approval, this is not the safe place I expected. My other family members are not interested in my writing. Perhaps there might be someone out there who might be interested in the grind of publishing all my books after a final edit and then seeking necessary copyright and other approvals? I am disappointed how little space my printed books take up. On completion, I guess even if I reach 1.5 million final words, these will only fill a large shoebox. When I visit a public library or stately home library, I now appreciate more the effort required to create all the books on display and the hopes and dreams of those who did so.

Autocrit have migrated me from the old system to the new version, which is more powerful, but I had to find new ways to get similar output for the few new tests I have done. A readability index has now been added to the new version, in addition to word repetition.

I have collected together all my various posts on the Allrighters website, the defunct Authors online site and TIPM and put them in Anatomy Two. The book is just under 100,000 words. Now I know why I have not made better progress on my mainstream writing! Interestingly, Russell Blake makes the same point about social media in his post I linked to above. There is a balance to be struck.

Short stories are the building blocks of my way of writing. While putting together further books this year, it is clear to me my individual short stories are much more successful than longer books. This Write to Done post offers some useful points.

My gradual drift back to non-fiction continues. Maybe with my own writing and reading, more widely, I have become even more demanding.

The fourth Cormoran Strike book Lethal White is big at 650 pages. Also back to the mould of the first two. I found the third book disturbing and evil. I am after all supposed to be reading for pleasure!

Jack Reacher (number 23) – Past Tense. Poor in comparison with those which have gone before. I am not alone in thinking this. Maybe he should do a better book every two years instead of the annual grind of another 420 pages.

Chasing Thunder, about illegal fishing in the Southern Ocean and Paint in the Sand about bomb disposal.

Black Diamonds – Wentworth Woodhouse book, a family history of the Fitzwilliams. It’s interesting because it reads like a thriller illustrating that truth is often stranger than fiction. It contains a good account of social and economic history from the mid 1800s to mid 1900s.

This will be a big push to complete manuscript final drafts of the rest of my fiction and non-fiction books and likely to be at least another 300k of words. This could be another eleven books, including some non-fiction, given that three books in 2018 were different editions. 2019 will be a challenge.

This should just about complete my writing career with a view to it coming to an end after ten years at the end of May 2020. I reckon I will be like an old soldier and just fade away. My website will go earlier in July 2019 because there is a break point in the name rental. All very sad but life goes on, downhill.

My ten years writing have provided me with the highs of writing stories and life events, meeting people and writers, and the lows of self-editing and self-publishing. I am currently reading Margaret Attwood’s book On Writers and Writing. She asks why she has written. If I ask myself the same question, the answer is a selfish one of enjoying myself. Luckily, I found in 2010, an enormous fund of ideas and material which needed to be downloaded from my head into short stories. Attwood hints at an element of madness being helpful to good writing and I chuckled. Many of my peers believe they are on this Earth to enjoy themselves. I believe one should try to make the world a better place in one’s life. I reflect I have not done much in my writing on this but I have done when working.

May I wish you all continued good reading and writing for 2019 with special thoughts to those of you trying to publish.

Douglas Burcham started writing on 1 June 2010 and self-published under the Allrighters’ name a storybook ‘Ywnwab!’ in September 2013. A million words of draft writing reached satisfactory completion in January 2014 split between 900,000 words of fiction and 100,000 words of non-fiction. The latter being about writing and memories of buildings, trains, boats and planes. Since then after a slow and aimless start better progress now continues to be made in converting draft writing into final manuscript proof printed copies ready for potential publishing. These are short and long story-books under the Allrighters’ name. He contributed a regular post to TIPM up to June 2016 and at six monthly intervals since.