This is Douglas’ first post in 2018 in his Writing and Reading for Pleasure series with updates on his productive writing activity so far this year.

I am typing this post on Friday 1st June 2018, which is eight years to the day I began writing. As I have commented before, writing is not a short-term activity.

Writing my target of a million draft words in three years took a few months longer until January 2014. I found between June 2010 and January 2014 having a daily average word count target of some 900 new words per day a good way of writing. My actual word count was about 750 words per day.

As previously stated in the four years since then, I have struggled to make progress in reaching a stage of being happy with how I had written my stories. I have tried unsuccessfully to set targets to drive my self-editing task. The best perhaps now being 10,000 words a week in 2018.

I derived great enjoyment from my original draft writing but the process of self-editing and rewriting has not been so rewarding. As previously stated in my last post, I have persevered. I have made progress by using the original version of Autocrit and Style Writer software to hone more of my individual stories into final versions for collections of short stories and longer books. Use of MS Word spelling and grammar checking is of some use and also the find/replace option, and go to for editing out efficiently my “no, no” words including “was,” “that” and “things.”

After I visited Ingram Spark in the spring of 2016 – my May 2016 TIPM post – I expressed a future wish of being able to assemble all my writing into final manuscript proof books. Each comes with a self-designed cover when I send them off to be returned as a completed book to sit on my bookshelf. I did not have high hopes because I saw a major hurdle in the production of a cover in PDF format. Also, when publishing Ywnwab!, in 2013, the process of formatting from MS Word in A4 to Royal Octavo page size took an age and proved a far from enjoyable task.

As mentioned before while turning out old paperwork I realised I had a solution all the time from going to the Matador Self Publishing Conference in April 2014. There I picked up a hard copy notebook from Doxdirect.com, given out as promotional material.

It has taken me a couple of goes this year to learn the quirks of the process. Doxdirect only print a limited range of book sizes but do so in both soft and hard cover format.  I have standardised my formatting in MS Word to A5 book fold mostly in Arial 11 font. This I can upload to Doxdirect and they then process and provide me with a quote for printing in black and white with a colour cover.

I have designed a common cover format in MS Word. Then using the MS Word 2007 and later versions I can save as a PDF file. The Doxdirect system includes a cover designer system, which I can now use proficiently for covers at a basic level.  I work with a draft cover on a trial and error basis to get the text in the right place with margins, the spine thickness correct and the cover to fit the book. I use a custom paper size on MS Word for covers of about 33 cm times 22 cm for my 120,000 word books. One can review what is to be printed.

Doxdirect do not provide any design or formatting services. They just print what you ask them to print with all your errors included!

There is no minimum order quantity. For a single copy, the cost is about £20 and this reduces as more copies are ordered at one time. Their website provides a calculator for costs on entry of book details. Just make sure you specify black and white text interior. Colour covers come as standard. This is neither the cheapest nor the most expensive but the facility to order a single copy is good. Their turnaround in three days is impressive. My cover template may have a glitch because colour consistency is not 100%. My books are printed on thicker white paper 120 gsm, than most bestsellers and IngramSpark.

Yesterday I received back three copies of my fourth physical proof the last of the GEMINI Trilogy. The first book I started and finished as a 100k book in early 2011 has now grown to a 380k trilogy. I am not very good at putting the knife to what I have written. As a follow up to Ywnwab! I prepared a book NAB! – Not Another Book – of all the other short stories I had written up to January 2018. I used this book as a first test for Doxdirect with the only problem being the cover.

I have now the satisfaction of having Ywnwab! (see photo below) plus four manuscript proof versions totalling some 525k words so my production line is rolling. Another 85k book is nearing completion. I have another 30 books in various stages of preparation from a few pages to almost final versions. How many I complete up to the same stage as GEMINI in the coming years is anyone’s guess. My interest and enthusiasm to do so have not waned. The time needed and available are the only constraints.

All my proof edition books require more detailed work. I get fed up rereading the same text. For some reason it is always easier to pick up errors on the final printed version! Ensuring consistency in a 400k trilogy is a challenge.

Publishing whether to or not

I continue to vacillate over publishing. Currently I am still not tempted to add publishing to my “Writing and Reading for Pleasure” aim in life. Three recent events have reinforced this view.

I like what I understood, the sentiments are of Philip Pullman on the sensitivity issue.

You do not have to buy or read this book. However, we hope you do and enjoy reading our stories. We do care, but the choice to read is yours and whether to like the stories or not.

I enjoyed reading and commenting on draft novels produced by several writers I met on the Internet over the years. At the time, I had little to offer for others to read. I would welcome any one willing to read and comment as a reader on some of what I have now written and I am willing to do the same in exchange.

I recall listening to a successful writer at the last Self Publishing Conference I attended in 2015. She had moved from self-publishing to being taken over by a major publisher who took full editorial control over her books, titles and cover design leaving her with little input. She is now back self-publishing. I can see the publisher’s point of view in that they are investing and taking the financial risk.

An article about the experiences of a brave author who has published caught my eye in March 2018.

What is good enough?

Given my eight years writing experience, this post on the Bookbaby blog did resonate with me. I recall the late Sir John Harvey Jones saying in business one did not always have time for perfection. Perhaps the British motor industry in the 1950s and 1960s illustrated one has still to try hard to get a good standard and this has motivated me. It has taken a long time but I am much more content, despite losing some of my original freshness, with the chosen way I write than I used to be. I have also learnt to take advice on writing with a large pinch of salt from those people who have failed to write bestsellers.

I have said I will not enter any more competitions because I think my unusual writing does not find favour. However, I have done so this week after a couple of years, since my last entry. This is simply because I enjoy working to a deadline, word count and rules, aiming for the highest standard I can produce. I continue to surprise myself how much better I can make the existing stories and chapters I choose to work up to submission.

During my eight years of writing, I have taken a great interest in book cover design by looking at displays in Waterstones and other bookshops and also several blogs.  Most cover designs do little for me apart from some on the following site. Their lists of covers for 2017 and 2018 are worth a look.

Fashions come and go. I always liked the original Penguin cover design, dropped I see by Peter Meyer who died this week and who is credited with turning Penguin around.

As I sit here writing, only one cover comes to mind from the last eight years – that of the hardback Casual Vacancy. Its simple bold use of red, yellow and black just cried out to be noticed. This is in contrast to the later paperback version in a neat and comfortable design. 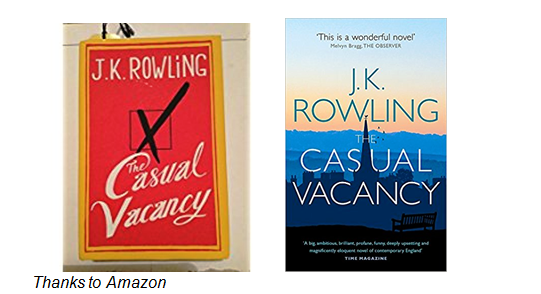 Most of the covers in the following leave me cold (BBC and The Book Designer).

A recent photo of Ben Fogle in the Daily Telegraph showed him sitting in front of his bookcase. The top shelf had books with their spines in one colour and the second shelf in another colour and so on, excited comments, because the books were sorted by colour rather than subject genre etc. 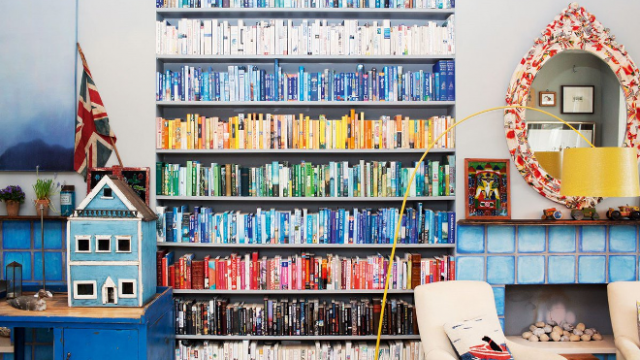 Other matters which have caught my eye during the last six months are:-

Short story anthologies are enjoying a boom in sales, rising by almost 50% in value, to reach their highest level in seven years. Bookseller (January). Given all my books are based on a short story format; this is encouraging.

Dying wishes. One of the reasons for printing up final manuscript versions of my books is to leave some record of eight plus years of effort. I am sad some people wish to destroy their lifetime work or history. A friend is reading about the huge house Wentworth Woodhouse Yorkshire and the burning of the family history.

I have read very little fiction this year apart from a third read of Lee Child’s The Affair the first Jack Reacher book I read in 2011. My son said if I started reading his books I would not be able to stop. How right he was! It includes the memorable line about the main street of one of Reacher’s remote towns in the USA – There was no architecture. Just construction. Also, mainly non-fiction medical (which are often better than thrillers with uncertain outcomes to complex procedures) and technical books on cars and aviation.

I have written a short story about a bookshop in the future where the books are printed while you wait. Maybe this is not as far away as I thought! (See this post). One of the French promoters aims – “The idea is to make people happy,” she said. “There is too much doom and gloom today.” Bravo.

May I wish you all continued good reading and writing for 2018.

Douglas Burcham started writing on 1st June 2010 and self-published under the Allrighters’ name a storybook ‘Ywnwab!’ in September 2013. A million words of draft writing reached completion in January 2014 split between 900,000 words of fiction and 100,000 words of non-fiction. The latter being about writing and memories of buildings, trains, boats and planes. Since then slow progress continues to be made in converting draft writing into final manuscript proof printed copies ready for possible publishing. These as short and long storybooks under the Allrighters’ name. He contributed a regular post to TIPM up to June 2016 and at six monthly intervals since.