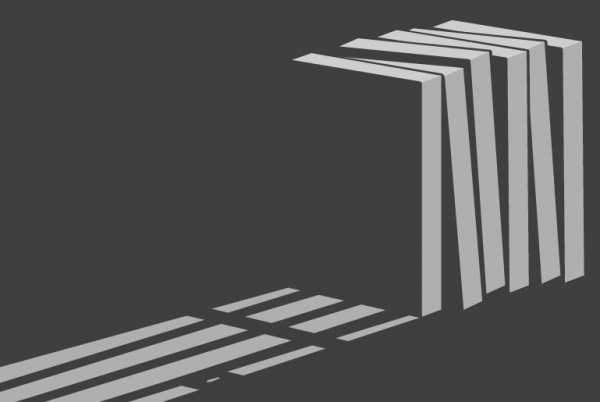 It won’t last long, the established companies won’t be happy but most of the people will.

I, the content provider (= the entertainment company, like a book publishing house or a film studio or a music label), don’t trust you, my beloved customer. And I don’t want to deliver to you my content as it is. Who knows what the hell you idiot can fucking do with it!

I, the content provider, have leverage with the content distributors (= the tech companies), because they can’t legally distribute my copyrighted content to you without my permission.

I, the content provider, want your money. And you won’t pay up unless I give you my content, so I came up with an idea: I’ll use my leverage with the content distributors and I’ll force them to implement some technical hacks. In that way, you can enjoy my content, but only in a way that I can control…

The DRM was born.

The purpose of the DRM was neither to prevent copyright violations nor to fight piracy: it was always about market control and user lock-in; it was invented to give content providers leverage with the creators of the playback devices and any sort of control over the user experience.

The Book Industry and the DRM

Let’s narrow the DRM topic down to the Book Industry: in the US, the Amazon Kindle Store approximately accounts for 75% of the ebook market, while almost all the remaining 25% has been taken by 4 major online retailers: Apple iBooks, Nook by Barnes&Noble, Kobobooks US and Google Play Books.

The other 4 major online stores don’t have a proprietary format or DRM (Apple actually has, but this differentiation is not relevant in this post), and they sell content in the EPUB file format (the de-facto industry standard developed by the IDPF organization) and use the Adobe DRM (that is a proprietary DRM file format developed by Adobe).

The established and huge book publishing companies have always tried to stop the advancement of the digital technologies, in fact their only concern has always been to hold their status quo and defend their printing business. So, it goes without saying: they were and are still happy to sell their ebooks with the DRM either on Amazon and on the other major retailers, because in this way they can control what you can do with their content.

The result is that even if you’re willing to buy a piece of digital content, which is supposed to be fluid by definition, the reality is that it is not! Because you can’t freely copy and share the content, highlight it, annotate it, you nearly can’t do a thing. You can only use the limited amount of features that are provided by the DRM system on the Amazon or other platforms.

Fortunately, you’ll need no more than two minutes to remove the DRM from your ebooks, just google “books remove drm” and you’ll soon find out about it. Under the DMCA in the US (and the EUCD in Europe), removing DRM is against the law, nevertheless accessing an ebook without DRM is pure joy: you can enjoy it with your preferred reading app, you can annotate the text, you can highlight it, share it, etc… the creativity of the app developers is the limit.

Bingo! That’s the key point: the DRM is not only useless, it’s not only a pain in the ass for all the honest people who buy content legally, but mostly the DRM prevents any kind of innovation on the ebook market.

Entrepreneurs are not stimulated by the idea of developing new reading/sharing/whatever solution for ebooks if most of the content in the market is locked with the DRM and won’t allow any of that. Very sad.

Wait a minute: what about the IDPF, the organization devoted to the standard formats development? Isn’t the standard a foreground for the technical innovation in the market?

Sadly, the IDPF is completely gone. It was born with the mission to establish a standard for ebook publishing, and after many useless, unsuccessful and expensive projects (EPub3, Readium, etc…), it’s currently busy with the implementation of an open source License Content Protection standard named Readium LCP. What is that? It’s a DRM for protecting EPUB! Even better: it’s a DRM for controlling the way you can access the ebooks in EPUB file format.

Are you fed up yet? Well, take a seat because we’re still scratching the surface of what’s going on in the DRM space.

The W3C and the DRM

Even worse, the W3C is gone as well: the W3C is currently struggling with different forces: its financial debts, the competition that siloed apps present to open-web browsers, and the huge pressure from the entertainment companies to redesign browsers to protect the corporations’ businesses instead of improving the user experience. These reasons are bringing the W3C, led by Sir Tim Berners-Lee, into a disastrous compromise that betrays the founding principles of the open Web: they are going to standardise DRM-enabling Encrypted Media Extensions (EME) in the browsers.

Not only is this going to be a huge and useless effort like explained above.

Not only is this going to compromise the vision of the Web as a global commons for the free exchange of ideas because streaming video, audio, images, e-books, even Web pages, are going to be cluttered by DRM.

But they will make us all less safe, because they are also criminalising the legitimate security-research. In fact, researchers will no longer be able to take things apart and break them in order to make them better in the “new closed and DRMed Web”, because they need to reveal security defeats in browsers only when the W3C will approve this kind of activity. That means malicious hackers, who already engage in other criminal activities, may freely take advantage of all the vulnerabilities they find in these DRM implementations before companies discover them on their own. Quiteindefensible, isn’t it?

Other two alarming events happened during the last few weeks.

First of all, Chrome won’t allow users to disable the DRM plugin anymorestarting from the next stable version (version 57).

Uh oh! Do you see how it’s going to work?

The major DRM service players are Google, Microsoft and Apple, and they are also the companies who own the three main operating systems. Is there an incentive for them to support other platforms with their DRM solutions? Not at all! Other platforms will have no chance to survive without DRM and so without content from the entertainment industry. It’s an oligopoly, and the guilty companies are mainly Google and Microsoft.

Then, the merge between IDPF and W3C has been officially announced. As thoroughly analyzed in this article, there’s a strict connection between the IDPF, the Readium “DRM” project and the fact that the W3C is soon to implement a “standard DRM implementation” for the “Open Web”.

The problem is not the merge, the problem is the fact that the “new W3C” is going in the direction of making the Web and the Digital Publishing World less open and more controlled by the big companies, and that’s what is going to happen in the short term.

The Renaissance of Publishing

The DRM is just a vain attempt of the established and archaic content companies to protect their old and endangered business models, but the good news is that, thanks to the quick evolution of digital technologies, something new is appearing on the horizon.

In that regard, in a world where very few companies are going to control — because of the DRM — the way we read, share and enjoy our books, the Renaissance Of Publishing is not only inevitable, but also foreseeable; and it’s important to know it’s coming, regardless of the above described intricated issues.

Let the Content Flow: this is the mantra of our company, which makes money by partnering with all the people willing to let their content flow without any DRM or any other constraints, in order to have the biggest possible reach and to be enjoyed in any way from other people all around the world.

Giacomo D’Angelo is CEO at StreetLib USA. He is a books geek and New Yorker.