D. J. Adamson recently interviewed award winning author Laurie Stevens to find out how she found a successful publishing home in Germany, which then garnered her an agent in the United States.

There is no single market on the web. Nor is there only one way for an author to sell their work. The internet is challenging traditional publishers, and those publishing independently are finding not only niches… but international homes.

Award Winning author Laurie Stevens is doubling her presence by making a name for herself in the United States and becoming a highly-reviewed novelist in the German market. Beginning her publishing life independently through such sites as Createspace, her aggressive marketing caught the notice of the A.M. Heath Agency in London, leading to a two-book deal with Blanvalet (Random House, Germany)

What is it like working with an agent and publisher out of the United States? “It keeps the world a smaller place, which is kind of nice,” Laurie said. “Marketing, however, works differently in other countries. For instance, it’s challenging to navigate virtual blog tours when you don’t speak or read the language.”

“Working with a big publisher is a nice compliment to your ego,” she went on. “On a more practical level, as with a publisher in the USA, cover design, editing, and production are done for you.  My first book that Blanvalet released, Todes Schuld (the translated version of The Dark Before Dawn), the publisher did not ask my opinion for any of the above. My agent in London simply forwarded me copies of the finished novel. Luckily, I thought they did a fantastic job on the cover.” 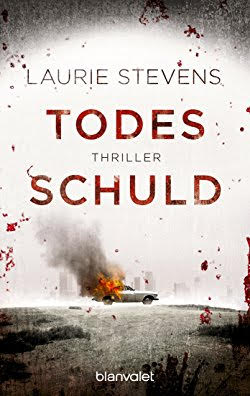 She was also lucky to have a German friend who was an avid reader and fan of the series. “She knows the story well. She read the German version and told me they remained true to the text, inserting their own “slang” when need be. For instance, if we say, “The cat’s out of the bag,” that phrase will be completely indecipherable if replaced word for word. The translator of Todes Schuld is Kristof Kurz, who translated all of J.K. Rowlings Harry Potter books for Random House, seemed very seasoned, and knew what words would be apropos to replace our American phrases.

“With the second book, which is coming out in March 2017, Du Sollst Nicht Begehren (the translation of Deep into Dusk), the editor asked for my permission on the title change and cover.  Again, I was impressed and gave my okay.  The title translates to “Thou Shalt Not Covet”, which is exactly what Gabriel the main character does in the book, so the title was a nice fit.”

Yet, it can’t be all good, can it? Asking Laurie what some of the negative aspects of publishing abroad, she didn’t hold back. “Promotion. I know what helps a book sell in the USA. There are bloggers you can contact, there are ads you can buy, there are sites such as Goodreads and Bookbub where you can discount the book or hold contests. There are virtual tools such as online blogging tours. There are niche audiences interested in your theme whom you can call upon. However, none of that is known to me in a foreign country. The big publishing houses are unwilling to share their media contacts for reasons of propriety, so, unless they promote your book, it’s rather difficult to do it on your own. And these days, an author must be his or her own publicist–unless you can afford to pay one. The catch for all we authors is, you’ve got to sell a lot of books!  So, if any of you know a blogger in the German reading world, do let me know! Danke!” 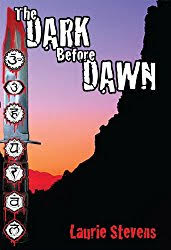 For those who follow Laurie Stevens, there was little surprise her book Todes Schuld (The Dark Before Dawn) won Random House’s Editor’s Best Pick for Book of the Month and the 2016 Amsterdam Book Festival Award. She has won 12 Book Awards for her Gabriel McRay series. Her latest, The Mask of Midnight, received a First Place Clue Award for Suspense/Thriller. In this, her third in the series, homicide detective Gabriel McRay is pitted against his nemesis and suspected serial killer Victor Archwood. Having a devious criminal mind’s genius for psychological “shell games,” Archwood forces detective McCray to face his abusive past and battles for the detective’s psychological destruction. Gabriel struggles against this overwhelming emotional pain from his past to win and defeat a serial killer whose judicial con-game created a loophole, which allowed him to stay in the midst of society, giving him yet another chance to prey upon the unsuspecting.

Did this international career move on Laurie’s part limit her ability to sign with other publishing companies in the United States or limit her ability to promote her work elsewhere? On the contrary, due to her risk to reach beyond the norm, Laurie has made a foothold in the literary market in Europe and has secured a local agent. Last year she signed with Renaissance Literary and Talent.

No effort is wasted and the idea that might pop up as a small gut feeling could manifest itself in big career changes.

An adjunct professor of writing in Los Angeles, D.J. Adamson has won awards for her science-fiction suspense novel Outré.  She is VP President of the Sisters in Crime Central Coast Chapter, Membership Director of the Los Angeles chapter, and an active member of Mystery Writers of America. When not teaching or working on her mystery series. She is a guest speaker on developing and layering literary themes.