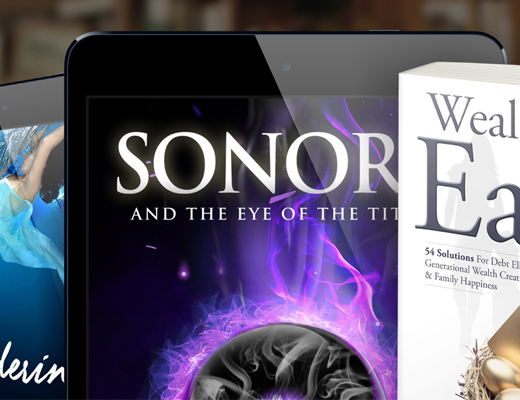 We have all heard the old saying about not judging a book by its cover, but unfortunately, most readers do exactly that. They skim over the bookshelf and they only pick up a couple of books out of the hundreds they may read the title of. Then they take one look at the front cover and put it back! We’ve all done it and then we find out from our friends that “X” book is the ‘best thing I’ve ever read’ so we pick it up despite that awful cover design and realize it’s amazing! Unfortunately, a lot of books will never get that second chance and if your book is one of them with a less than stellar cover … it may never be taken off the shelf. So what do you do?

People don’t want to look at a book that’s all in black and white. Even if it’s a long chapter book and you don’t have any pictures (because most adult books don’t), they don’t want a cover that has no pictures. Sure, there are times when you can get away with just a few words on the cover, but make them interesting to look at. Adding some color and changes in texture or shape can help. If you have a picture though, even if the book takes place before color photography, people like the idea of color.

Don’t Go Too Over the Top

If you have too many colors and images or too many things going on, people are going to pass over your book. The reason isn’t that it’s uninteresting; it’s just that it’s too confusing and they don’t really understand what’s going on. As with many things, less is going to be more. You can fill up the entire space if you want, just make sure that it’s done in a way that makes sense and all the pieces fit together. It can even be a bit of a puzzle, and items don’t seem related, as long as they don’t also seem to be overwhelming.

When people are looking at a cover, they don’t want to see a picture of Pluto on your romance book (unless it takes place on Pluto) or pictures of rockets on your book about the 1920s. They want something that really makes them think or gets them excited about what’s inside. Writing a crime mystery? Put a tantalizing clue on the cover. A romance? Give them an image of the characters.

This is possibly one of the most important things about having a great cover design. You want to make sure that the cover is different from what other people have and that means being sure it’s not a copyrighted photo. Nothing can turn a potential reader off quite like a bad stock photo or one they have seen on another book cover. People want to see that you have put a little work into it and that means creating something for yourself, not just taking a freebie image off a website.

Don’t Be Afraid to Hire A Pro

One of the best things you can do is hire someone who really knows what they’re doing. After all, there’s a reason other people are paying them, right? These are people who will take a look at your book, get an understanding of what it’s about and come up with a unique idea. Or they can take your idea and turn it into something good (you know, if you’re looking for an awesome dragon on the cover and all you can draw is stick people).

You can choose to put something a little more obscure on the cover too. Something that maybe doesn’t look like it relates at first glance but really does when you get into it. For example, think about the book Snow White and the Seven Dwarves. Pretend you’d never read the book and you pick it up to find that there’s a giant apple on the cover. Wouldn’t you be interested to know what that apple means? A pretty girl or a dwarf would just make sense, but an apple would make you think. This kind of reference can draw people in as well (so long as it’s well done).

The very best thing you can do is come up with a couple options and take a look at them. Design the entire thing even if you use stock photos for the start of it, just so you can get an idea of what you want and where you’ll put things like the title, a tagline or your own name. If you can, get complete concept drawings and show them to your friends and family to get their input. It’s going to be all up to you in the end, but for the short term, you’re definitely going to want others to let you know what they would think if they saw the book on a shelf.

Don’t let your book sit unread on a library shelf or unpurchased on a bookstore shelf just because it doesn’t have the type of cover design that people are looking for. There’s so much available if you just take a little time, and the masterpiece you’ve poured your heart and soul into is one that definitely deserves to be read. Make sure no one is judging it unfairly by the cover.

Click here to get a BEAUTIFUL book cover designed today!

Joshua Jadon is a book cover designer for New York Times and internationally bestselling authors of all genres. In 2013, after attending Central Michigan University for 2 months, he decided to drop out and pursue book cover design full-time. Joshua currently operates out of Grand Rapids, Michigan and loves to spend his time chipping away at the computer, traveling, writing, being with family, listening to music, and learning new things.