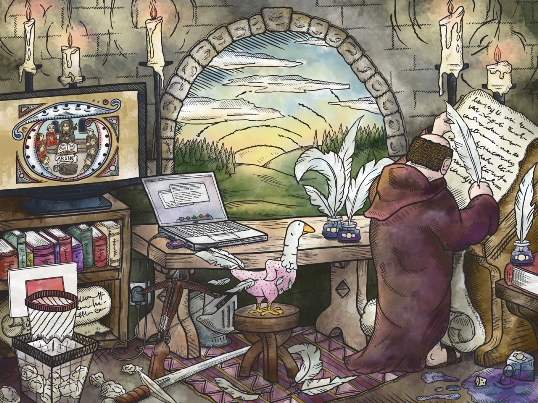 I’ve written eight historical humour novels so far. Six of them were in my Brother Hermitage series and two very un-straight histories. Each time I start to write a novel I need a “conceit”. What is the core idea around which the tale will be spun? Is it that a character holds a simple but very misguided philosophy? Is it how someone could be killed while sitting on the Garderobe? Is it that King Harold didn’t die at Hastings after all? I tried starting one novel before I had an idea firm in my mind, hoping that the writing would bring it out; I ended up re-writing the whole thing. Others may work differently but I know I need that central point.

Having completed the first title, The Heretics of De’Ath, I sent it around the publishers with no luck. So in 2010 I uploaded the book onto Amazon, hopeful that someone out there might find the blurb amusing and intriguing enough to download. In the first year seven people took up the offer and I was quite pleased. I wasn’t expecting millions but seven downloads with a couple of warm reviews was very pleasant.

It was only in 2012, on clearing out old bookmarks from my computer, that I discovered Heretics was selling 1000 a month and was hitting the Amazon Top Ten in historical fiction. That was enough motivation to get on with the second title I’d been planning. Looking through the reviews, I was hugely encouraged by the reception. Peopled loved the characters and the humour and wanted more. Nothing prompts writing like a reader. Of course, some disliked it, but it was clear my style simply was not for them. There would be real danger in trying to “write to the reviews”. I’d risk losing my author’s voice and alienate those who did like what I was doing. Comments like Cadfael meets Clouseau or Terry Pratchett does 1066 were very kind and inspiring.

My writing comes alive when I make myself laugh. Out loud, and at my own jokes! Laughing is a joy and writing it down is great. Being editor, publisher, sales director, proof reader and author, I have to go with what I believe in, so I have always written what I find funny and kept my fingers crossed that readers will agree. With reviews, I can take inspiration from those who find it all “hilarious” “or laugh out loud funny” or who advise people not to read in public because the noises will be embarrassing.

The process of writing the series has always been about fun and seeing what grand historical moment I can misinterpret. Historical fiction can sometimes be slightly pompous and my starting point is always, “what if they got it wrong” – such as the reporting of the Battle of Hastings, or the Doomsday Book. Simple ideas that can have humour woven through them. And characters who are real in the sense that they muck things up as often as they get them right – just like the rest of us.

In each book, wound around that central conceit, I’ve known how it was going to start and how it was going to end – roughly. The most recent outing for the historical comedy detective Brother Hermitage was written with the plot and the text open side by side. I could quickly change the plot as a chapter developed and look ahead to what the implications of that might be. I’d plot out a chapter at a time and then write it.

Each book then has several read-throughs and I’ll read it aloud as well because I find that helps when writing “funny” – you can see if the joke works pretty quickly and, if it doesn’t, then I’ll rewrite it until it does – or remove it altogether. Using Lulu I also print a proof copy to carry around and mark up. Sometimes the words flow and sometimes they crawl. I imagine it’s the same for all writers. Writing is a pleasurable activity for me, made even better by knowing that I have readers waiting, nay demanding the next Brother Hermitage instalment.

Howard of Warwick is the author of the world’s best-selling historical crime comedy series. The Chronicles of Brother Hermitage have sold over 40,000 copies in eBook and paperback.

He’s also done some very questionable things to the great events of the past in the Doomsday Book (No, Not That One) and The Magna Carta (Or Is It?).