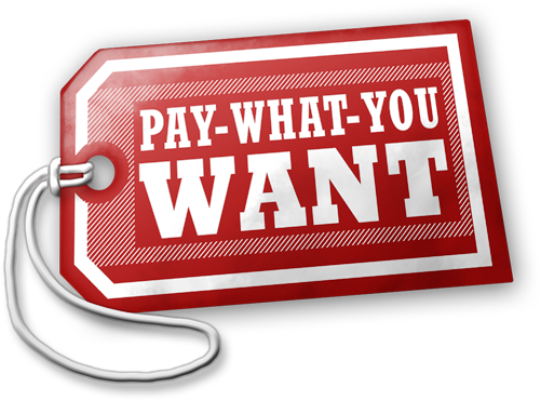 “Why do publishers fight digital?” This question, asked by many, is answered by Hugh Howey: “Largely due to the fear that they’d lose control of distribution”. Describing how difficult it was for the music industry to adapt to e.g. iTunes, Howey sums it up: “They were right to be worried, of course. These things came to pass. But they were wrong if they thought they could stop the change from happening.”

Like in evolution: if the environment changes, adapt or die. Musicians, movie makers, book authors are closing ranks, armed with DRM and anti-piracy claims, but it’s a lot like sending tanks to fight glaciers bringing the next ice-age. Those who try to see the digital revolution as opportunity instead of threat are called thieves or dreamers. However, calling to an audience’s generosity instead of greed can be effective, as the case of Headsets.com and many other Pay What You Want services show. But the idea is controversial even among authors themselves. Some say that even temporary free giveaways kill the sales, so they treat those who promote their work this way like traitors. PWYW books without a minimum price are even more contentious. “How could you!” some writers scream. “You don’t go into any other business and expect a free lunch, free car mechanic, free furniture, etc.”

It’s a bit funny when the same group claims that books shouldn’t be treated the same way as other consumption goods. “It’s an art, not a commodity. It’s something much more noble, its value can’t be reduced to just the financial aspect”. But when it comes to removing the tools of commerce from books, the same guys cry that it’s their hard work and it should be paid for with ordinary, mundane money.

Not all authors, of course, as there are voices of reason among them. “Comparing us to plumbers or furniture makers doesn’t fly,” says Will Phoenix. “We NEED plumbers as long as we have indoor plumbing. We do not need creative writers to survive/exist, ya know?”

I agree with Will, but not because of the survival issue. (On the other hand, “Man shall not live by bread alone, but by every word that proceedeth…”; ya know). If a car isn’t fixed properly, you go back to your car mechanic. You can see and touch furniture before buying it. With most retailers, it isn’t possible to return eBooks if a buyer isn’t satisfied. Those who do allow returns keep control over your device. An eBook is a bit similar to a restaurant dinner. If it’s not tasty, you won’t go to the same restaurant again, but you pay anyway. Paying upfront for a book by a new unknown author is buying a pig in a poke and maybe that’s why it’s so difficult for new writers to become recognized, even though many of them are brilliant.

Of course! Writing books is hard work. It takes up not only time and focus, but as it demands personal engagement, it can be also very painful. The problem in talking about rewarding it is, that most people expect to be paid for the EFFORT, and not for the EFFECT. With a car mechanic or chef, you don’t care how many hours he spent fixing your vehicle or preparing your dinner. It must be get done; this is what you’re paying for. When a reader pays for books, he pays not for the author’s sleepless nights, ripped out heart, but the pleasure of reading, which is the effect. The internet is filled with books written so badly that they aren’t worth the time to be read, even if they are free. This applies not only to self-published stuff; publishing editors are fallible, as they are only human. These pieces of junk may also have been created with a lot of effort and engagement. So what?

But again! Books are not like fixing cars, plumbing or chewing gum! They are bought and read not for biological or social necessity but FOR LOVE. And this is the idea that inspires the authors who distribute their books in open models, where readers decide how much to pay, such as the model proposed by Leanpub.com or that by OpenBooks.com. One of the options for selling books with LeanPub.com is setting a minimum price (which can also be $0 – i.e., free) but the reader can decide to pay more than the minimum. If the author chooses, the book can also have the “100% Happiness Guaranteed” option, which allows the reader to easily get a refund within 45 days of purchase.

OpenBooks.com is even more revolutionary – the service allows readers to download DRM-free eBooks and decide how much to pay for them after reading, using the payment link embedded in the file. Furthermore, readers are encouraged to share files with anyone they want. This is based on the belief that good memes go viral (by the effort of the users, not marketing) and that booklovers will reward their beloved authors willingly, if the book provided the pleasure of reading.

Although some authors criticize the idea of selling books on as open model as “thievery”, others are fascinated with the way these services care for authors, support self-publishers and propose a really high revenue share for authors. Not to mention readers within this model, who feel trusted and respected as contributors. People are good by nature, and support charities, fair trade and all the initiatives which show the human face of a specific person, and not the corporate logo. Appreciating individuality – this is the potential of a trust-based economy for the digital era.

Monika Pacyfka Tichy is an elvish soul in a hobbit body, but rides a real motorcycle. Fan of PWYW, uses it for photography services and her books distribution. Journalist, motorcycle teams and events coordinator, traveler, blogger; values role of motorcycle workshop assistant more than former executive manager position in mid-sized IT company. Believes that world can be healed if people hugged each other more. Loves life and lives by love.