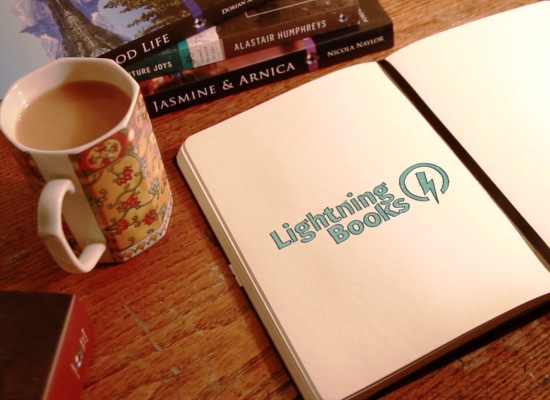 The week of London Book Fair (LBF) always brings with it a host of announcements, whether it is a major publisher signing a six or seven figure deal with an author or the launch of a new imprint. With its hundreds of exhibitors, this annual trade show also becomes a home from home for many companies servicing the publishing industry; be they printers, literary agents, distributors or new and enterprising digital start-ups. Everyone is out to capture their piece of the industry limelight and find their hold in a highly competitive market. It’s what trade shows like LBF are all about. Increasingly in recent years, LBF has been sharing floor space and attention with authors and publishing service providers as much as the perennial big name publishing houses and independent publishers throughout the world who travel to LBF.

Today, the opening day of LBF, was such a day for Dan Hiscocks. He certainly caught the eye of The Independent Publishing Magazine. Hiscocks is a former director of the Independent Publishers’ Guild in the UK. He is the founder of Eyestorm Media and its imprint Eye Books. Hiscocks has recently returned from a five-year period of time living and working in the USA in the publishing and digital media sectors.

A little of author and publisher Dan Hiscocks’ background:

Dan is the ‘muppet’ who 20 years ago decided that he wanted to set out on a mission to show that ordinary people can and do achieve extraordinary things. And so Traveller’s Eye was born (to later become Eye Books).

Dan believes that we live in a world which now allows people to get off their **se and do something pretty amazing. The purpose of Eye Books is to champion people who are ‘living’ as opposed to simply ‘existing’ and share their stories. Dan believes that the more you put into life the more you get out of it. However, he also knows that it is hard to take ‘the road less travelled. He finds that what helps motivate him to get of his **rse and start doing is hearing and finding out about other people who are doing really interesting things that they are passionate about.

The hope is that if others feel like this too, then it is self-fulfilling and we all have a great time.

Dan recently went on an adventure and lived in the US with his wife and two kids for 5 years. There, he was involved with lots of interesting people and projects which involved start-ups including latakoo.com an online video compression tool (recently highlighted by The Huffington Post as being a technology company to watch), pressforthepeople.com – output from a think tank exploring how to monetise news, customerrespect.com – crimsonhouse.net – a tool to facilitate collaborative working teams within a ‘club’ of freelancers.

As an author, he learned a great deal when he published his first travel and adventure guidebooks with other publishers and eventually through his own Eye Books imprint.

Hiscocks’ Eye Books launched Lightning Books at the London Book Fair today, a co-publishing fiction publisher. Readers of TIPM will appreciate that there isn’t anything entirely new in this model of publishing; call it co-publishing or partnership publishing — essentially the author and publisher share the cost of publishing and the profits from book sales are shared. Unlike vanity publishing, co-publishing or partnership publishing generally requires the publisher to have an established trade distributor and a firm commitment to marketing an author’s book and generating sales. It’s a model of publishing that has worked far more successfully in the UK than the United States. Hiscocks describes Lightning Books as a challenge to the way the industry currently publishes books and different from simply using a self-publishing service provider or DIY publishing on a very strict budget.

The publishing industry is changing. Falling profits and the challenge of digital have made people anxious.  Commercial considerations have driven out risk and creativity. Unknown authors find it very hard to get a hearing, let alone a publishing deal.

Self-publishing offers a solution to authors, but doing that on the cheap can yield poor results, and the books still don’t get their chance to shine. Authors are crucial to publicising their work and deserve more of the reward if their book succeeds.

Our new publishing company is responding to this challenge with : giving publishers a new way of nurturing new talent, and giving authors support in getting their work a fair chance to succeed.

As I indicated, there are a number of publishers in the UK that operate very similar models: Book Guild Publishing, John Hunt Publishing, Matador and the recently defunct Indepenpress with varying levels of success. The aim is to remove some of the barriers to publishing while still maintaining established editorial, production and market reach. Dan Hiscocks argues that there is a valid place for this model of publishing because ‘commercial considerations have driven out risk and creativity’ out of the industry and left authors to deal with the vagaries of self-publishing on a very cheap budget and little real chance of reaching a wide readership. He also questions the true value of what he calls ’99 pence marketing’ when authors price their work so long in an effort to achieve market penetration.

Lightning Books’ Editor-in-Chief is Martha Ellen Zenfell who has worked at the Observer newspaper, Time Out and Inside Guides. While Lightning Books is open to all fiction submissions, there is a standard publishing selective process of acceptance, and the imprint has plans to release 20 titles in its first year. The publisher states that it will not profit from titles until the first 3000 copies are sold and net receipts will be shared with authors on a 50/50 percentage (after retailer discount). Initial print runs will generally be et at 1500 copies (paid by the publisher) with titles also available in e-book. Authors will contribute an initial first payment of  800 after submission acceptance and pre-production. Further payments will be split into two (60% and a third of 40%) based on the overall cost of the author’s contribution.

To assist the launch of Lightning Books at the London Book Fair, Hiscocks also announced a writing submission competition with a prize of ‘equivalent to a £7000 advance’ for the winner. You can take a look at the publisher’s submission guidelines here, and the contract is also available to view here. The actual publishing process is detailed here in this PDF. The prize amount also does give at least some kind of indicator that author investment on any accepted submission will be a four-figure amount. Trade distribution for Lightning Books is provided by Littlehampton Book Services and its first title is due next month: Douglas Board’s MBA: A Novel.

Overall, co-publishing or partnership publishing — even with the right publisher — should not be entered into lightly. It is not self-publishing and should not be confused with it. It’s a serious financial commitment and partnership and ideally I think it is more suited to nonfiction book projects than fiction.

I think Hiscocks has assembled the right team and approach to the launch of Lightning Books; my only concern for its long term success is that it is strictly a co-publishing fiction imprint and his business success has been in the field of nonfiction.