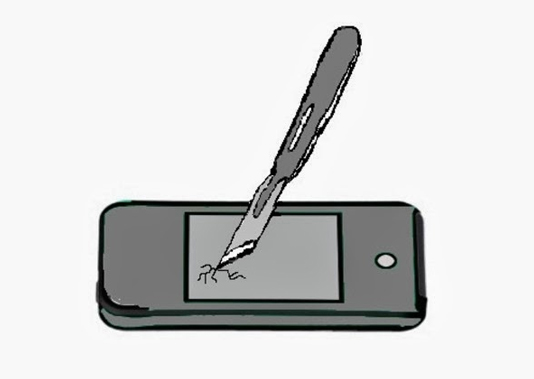 If you have been following publishing blogs and digital technology websites over the past few days, then you may have read about a proposed software application for the iPad called Story Surgeon. It’s the brainchild of Ryan Hancock, a writer and app creator, and a little over a week ago Hancock launched a Kickstarter project page to secure funding of $15,000.

Here is Ryan’s promotional video for the Story Surgeon app.
So what exactly is Story Surgeon, or more to the point, what will it be when it’s fully developed?
This is a piece taken from the press release Ryan sent out to launch his Kickstarter funding campaign.

Once developed, the Story Surgeon iPad app will allow readers to make in line changes to purchased eBooks and share the “filters” online. Hancock says the free app will appeal to parents who want to clean up their teen’s books and fan fiction writers who, for the first time, can legally change an author’s words. (Such as substituting themselves for a main character or writing an alternate ending.)

“Copyrights will not be violated,” says Hancock, President of Out Of The Gutter Development. “The program creates a separate filter file that when shared, can only be used by others who have purchased the book. The original work remains unaffected and private.”

Yup, you can see where this is going and why it has created quite a degree of debate over the past few days. Victoria Strauss of Writer Beware first reported on Story Surgeon and her piece was picked up by a number of digital and technology websites. Strauss is understandably concerned that the app may challenge copyright laws and authors may be none too pleased to see the content of their e-books cut-up, added-to and potentially shared (illegally) in a form never intended by the original author. Chris Meadows of Teleread and Nate Hoffelder of The Digital Reader argue that the idea behind the Story Surgeon app is not entirely new and it shares some similarities with other editing apps for audio and film deemed not to infringe copyright laws under fair use. In essence, the counter argument is that what is shared is not the book, but an editing command file which will reconstitute the book the way the app user wants. The critical point here is that users of the Story Surgeon app must already legally own a copy of the book to implement editing changes.
I think it is also important to point out that Hancock originally intended the app to help resolve the issue of removing offending or explicit material from books and also a handy app for the fan-fiction community. I think this comes across far clearer in Ryan Hancock’s promotional video for the project. That said, I’m still unclear as to how developed this idea and app really is after all I have read from Hancock and other websites. Hancock has responded to the current debate, on Writer Beware’s comments, and also on his own blog, though he rather skirts over the real details of copyright infringement and the technicalities of the Story Surgeon app—believing it does not challenge copyright laws, citing author Cory Doctorow with this quote: ‘There is no way that it is a copyright infringement–or even a bad idea–for readers to choose, privately, in what order they read the books that they lawfully possess.”
The above links and comments, particularly from Chris Meadows and Nate Hoffelder, pretty much trash out many of the issues raised by the Story Surgeon app, along with the Writer Beware piece by Victoria Strauss, so I’m not going to rehash it here. All the arguments and comments are entirely valid, but some more salient points.
There is actually nothing new in Hancock’s app. The very nature of re-purposing, reinterpreting and repackaging content with third-party editing and retelling is as old as parables and tales passed down from generation to generation. Every tale, anecdote and story has been re-invented, retold and enhanced for thousands of years to suit the needs of cultures and communities.
The issues here are whether it is valid or legal to carry on that process in a modern age when we are obsessed with rights, ownership and the commercial value of idea to product. We’ve been photocopying and sharing books for many years, both for personal consumption and through educational institutions. I can’t argue that an author or originator of a product deserves a share in profit of anything shared for commercial gain by another third-party. But if an reader of my book, buying it legally, decides to read the book backwards, ignoring ever second word or page, or substitute their name for a character’s name—I can’t fight the reader. And if there is an app to help them make that easier to do—equally, I can’t stop them enjoying the book in a way I didn’t imagine as its author. It might not be what I intended when I wrote the book, but my readers are free to dream and interpret my books any way they want and by any method they want. If you bought it, you own it.
The issue here is also how the book is shared, and if that process of sharing infringes my rights as an author or leads to a profit on my book I don’t get a slice of. What is proposed with Story Surgeon is the sharing of personal reader edits, not the book file itself. You have to already own a copy of the book to create value in downloading someone else’s edited changes.
Sure, the fan-fiction world have been debating these issues since the advent of the Internet, and much of it is about trademarks, licencing and use of characters. It’s an author’s minefield and a lawyer’s dreamworld!
I want to return to Ryan Hancock’s comments over the past 24 hours. I’m still somewhat bemused as to how far this Story Surgeon app is really close to development and launch and Hancock didn’t help his fundraiser cause on Kickstarter by veering off on a moral maze tangent in his last post on his blog. I get the philosophy behind the app but I don’t get the self-enforced dilemma he seems to cloak himself in.

I hesitate to bring religion into this since many do not share my beliefs or values, but I think to understand why I would champion such an “app for copyright infringement” as Ms. Strauss called it, one needs to understand my dilemma.

There are many people that are passionate about books. They live and breathe the fictional worlds of their favorite authors and those author’s words are sacred. Even if those words are disturbing or vulgar.

There are many people who are passionate about keeping their minds and bodies pure. They believe this life is the time to prepare to meet God and as such, try to avoid (or help their kids to avoid) amoral influences or media that could make it difficult to feel the Holy Ghost to guide them. For them, the answer is a no-brainer: Stay away from books with mature content.

The problem I’m facing is that I’m firmly entrenched in both groups and feel like I’m being ripped in two. There is so much great literature out there (especially when you read books intended for adults) that has profanity, graphic violence, and explicit sex. Things the majority of the literary world would just shrug at.
~ Ryan Hancock, Story Surgeon

There is an unnecessary war being waged here that doesn’t need to be fought. While I want to respect Ryan’s opinions and views, it strikes me that there is almost an Adam & Eve and the forbidden fruit analogy at play here. Why would you feel the need to read great literature if you feel so much of it contains troubling, unsuitable or unsavoury elements? Fine, read something else you like. And while I feel there is a place and value for the Story Surgeon app (if it every actually happens), I’m concerned that he’s missed an important point here. We buy what we like, what we identify with—not what we want to peer over the garden wall at, tease ourselves with, and then decide how we can best sanitise it for the joy and pleasure of others.
Seems to me it is like ordering coffee with sugar and then trying to scoop out the sugar grains before they dissolve. I’ve yet to decide whether Story Surgeon is a serious app or just another moral maze.

[Postscript]
One area I didn’t touch on above is also DRM (Digital Rights Management) and this could also be a major stumbling block for the development and success of the Story Surgeon app. Ultimately it is not so much the intended use of an app, but rather the nefarious uses third-parties can use apps for.


UPDATE (Monday, January 27th):
When I first reported this, the Story Surgeon app on Kickstarter had reached a total of $170. Despite all the media publicity over the past week, it now stands at $205 approaching its halfway point]


UPDATE (Tuesday, January 28th):
Ryan Hancock, developer of Story Surgeon, has responded further here in the comments and also with an extended blog post on his website to the questions I asked and to the commentary debate on Writer Beware.

Mick, in answer to your questions: The only progress on the app has been preliminary research into whether the app would be possible and how much time/effort it would cost to make. (Apparently it’s $15K worth.) I’m in contact with two IP lawyers and a team of programmers who are excited about the app’s potential. (They are currently researching the DRM details and will get back to me.)

I realize that no matter what precautions we take, there will probably be someone who finds a way to use the app to break the law. The only thing I can say (and I have said it several times) is that you wouldn’t outlaw CD burners because they can be used to pirate. I believe the fact that we make no money off the filters and possibly none off the app itself, will be my best protection when someone decides to disobey our terms of service. Who knows, it may be no protection at all. I guess that’s why I’m talking to lawyers.
~ Ryan Hancock

If the Story Surgeon App is determined legal and becomes a reality, it will not allow users to make filters of books who’s author has expressly denied their permission. Also, to prevent misuse and piracy, the app will not allow the user to save the filter any place but on the main sharing site, where illegal filters will be flagged and removed.

Some people will be satisfied with this. Many won’t. But until the world can decide on which version of the Bible to believe, I’ll be making each book my own. Be it with a complicated app, or a Sharpie.
~ Ryan Hancock

If you found this review or article helpful, but you’re still looking for a suitable self-publishing provider to fit your needs as an author, then I’m sure I can help. As a publishing consultant and editor of this magazine, I’ve reviewed and examined in detail more than 150 providers throughout the world like the one above. As a self-published and traditionally published author of nine books, I understand your needs on the path to publication and beyond. So, before you spend hundreds or thousands, and a great deal of your time, why not book one of my personally tailored and affordable consultation sessions today? Click here for more details.
If you would like to leave a comment on an article older than one week, please use the Blogger comment facility rather than the Facebook comment app as we do not monitor FB comments as regularly.