Raider Publishing International appears to have begun a new charm offensive against its online critics and disgruntled authors over the past couple of months. We’ve chronicled Raider over the past few years from its inception as a promising and innovative publishing service for authors, through to its descent into overexpansion, puff and pastry, and poor reputation in the self-publishing community.
It has been difficult to experience and witness a once promising self-publishing service, like some of its authors, go from hero to zero in a relative short space of time. God loves a trier and Raider Publishing International has forged on despite continued complaints and negativity in the author community. Launching Purehaven Press (which has tanked) was nothing more than a sidestep and detraction from what was going on at the company (author dissatisfaction leading to staff departures), and I always felt attempting to reinvent Raider under another name was simply running away from existing problems. You need to fix what is wrong from the very beginning. There was a rather lame attempt to do that and at least an acknowledgement some years ago that things were going pear-shaped.

…we’ve also seen our own family – the Raider Publishing staff – nearly double this year to meet the demands of  a growing author base and a book-selling market which we are becoming a very big part of. There have of course been problems as well to go along with these successes, through a package we no longer … ~ Adam Salviani, RPI

Of course that podcast is no longer available, but the recent Raider Publishing International media offensive has meant that current negative press has been acknowledged. Raider has recently relaunched its broadcasting network after a considerable hiatus, and though it’s missing from the links on their main website, you can actually find it here.
I’ll draw your attention to this episode of the Raider Broadcasting episode, The New Writers’ Forum, where company founder Adam Salviani talks about his company’s premises at the Empire State building. It’s worth noting Leanne Shea Langdown’s post at this point, where she actually travelled to the Raider offices in New York last year and what she discovered. More from Langdown in a moment.
Recently Raider has begun posting author testimonials on its blog page and YouTube channel. I’d like you to take careful examination of these videos. It certainly is a curious collection; from the sublime but short execution of ‘Jeff’, to the gushing Oscar speech of ‘Charlotte’, to the (frankly) scary appearance of ‘Anil’.

This testimonial appeared today (December 12th) on the Raider blog, but was quickly removed from their YouTube channel. Again, like the other testimonials, this one involved a very short clip from the mysterious ‘Bruce & Carol’. Therein lies much of the mystery of Raider’s testimonial videos. Everyone is anonymous as an author!
Yes, Charlotte Branch and Jeff Mason may be Raider authors, but try finding their books on Raider’s website, Amazon, or the Internet in general, and you will have great difficulty. I couldn’t, and I tried most of today. I did manage to find Anil Bali’s book – God’s Mail to Mankind. But so much for Raider’s author marketing services helping these authors reach an audience! To be fair, both authors could be using alternative aliases for their book titles, but I was struck by how all the authors in these testimonials didn’t use the testimonials to plug their books, and that included the latest mysterious author pairing of ‘Bruce and Carol’. Seems a little strange! That’s the first thing I’d have wanted to do as an author. Not one author out of all five testimonials makes any effort to show a copy of their book, or even make mention of a specific book title in the videos.
Oh, and a quick look up of Adam Salviani’s Facebook page turned up this. Charlotte Branch, complete with her positively gushing review of Raider (her eyes and head constantly flickering above to the heavens at every positive mention of Raider) looks remarkably like a friend on Adam’s Facebook page back in 2006! I could of course be entirely mistaken! You can make up your own mind. 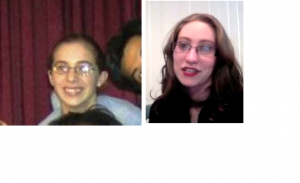 Maybe it’s just the rose-tinted glasses she has on!
I also couldn’t find any professional LinkedIn profile to Jennifer Holloway, the self-proclaimed ‘senior executive’ of Raider Publishing, and a fine a job of recuperation she is doing for the company at the moment.
Here is what Raider Publishing International need to do to help recuperate their reputation in the following 5 testimonials they promise are coming to their blog in the next few weeks.
Instead of continuing to publish unverifiable testimonials, publish testimonials with authors actually linking to their books and websites. Salviani makes direct reference here (4 minutes in) and also in this interview on Canadian radio to a disgruntled 2% (out of 100%) of authors. Yes, he is right. Every company has its share of customers not entirely happy with its product or services. He is also right to point out that no company (even in the field of author services) is ever going to have an exemplary customer record, but the 23 authors who have filed a petition to the IC3 (organised by a former contract employee of RPI), together with many authors who have contacted TIPM and Writer Beware about their grievances with the company, is hardly the 2% of disgruntled customers Salviani claims exist. It sounds to me more like the boy with his finger in the dyke holding back the pushing waters.
The math alone seriously challenges Salviani’s figures (98/2%). A look alone at the grievances of authors here, numerous online consumer resource feedback pages (here, and here) tells a different story.
From scambook.com:

Information about Raider Publishing International was first submitted to Scambook on Nov 07, 2011. Since then the page has accumulated 44 consumer complaints. On average users reported $51108.83 of damages. Scambook’s investigation team reached out to this company a total of 4 times, Scambook Investigators last contacted them on Nov 06, 2013.
~ Scambook.com

The amount of complaints I’ve had here alone, combined with other resource pages, amounts to somewhere between 50-100 authors, and these are the ones I know of, let alone the many authors who find it difficult to go public on issues like this. Salviani’s math just doesn’t add up. With over 1000 titles published by RPI (that’s about 750 authors by their own claimed figures) in the past eight years, even at just 50+ disgruntled authors, 7% is hardly a group of clientele I’d easily dismiss. And I think my figures are being very kind to RPI.
Author Leanne Shea Langdown did what many of us want to do when we feel we’ve been taken for a ride. She decided to confront Salviani and RPI at their New York offices. Incidentally, one of the above RPI podcasts features Salviani waffling lyrically about his office on the 59th floor of the Empire State Building and recalling his grandfather who once worked in the same building. It seems Salviani was as much a ghost as his grandfather for author Leanne Shea Langdown.

…. Langdown continues with a similar occurrence when she tried to locate RPI’s mysterious bookstore …

I then googled the address of the Book Shop and wondered how long it would take to get there.   What if it didn’t exist? What if it was a “virtual book store” and I wasted our final day in New York? So I asked Google Earth and did a virtual tour. Hmmm. No sign of a book store!! The Lafayette Theatre yes, a furniture store, some quaint little shops and an insurance agent, but no Raider Book Store that I could see as I “drove” down Lafayette Avenue in Suffern New York. After my virtual tour on Google Earth I chose instead to spend my last day wandering through Central Park with my bestie. ~ Deep Fried Fruit Blog

With a further five Raider testimonials to roll out over the coming weeks, perhaps the best thing Holloway, Salviani and company could do is create a better job of promoting their authors when placed in front of camera. A link to one or two books wouldn’t go a miss. But above all, if Raider Publishing International really wants to recuperate its image to perspective new authors, it might consider addressing the grievances of previous authors first and foremost, instead of consigning them to the dustbin labelled ‘Well You Can’t Please Everybody, Can You?’ even if they only amount to the claimed 2% of all Raider authors over the past eight years.