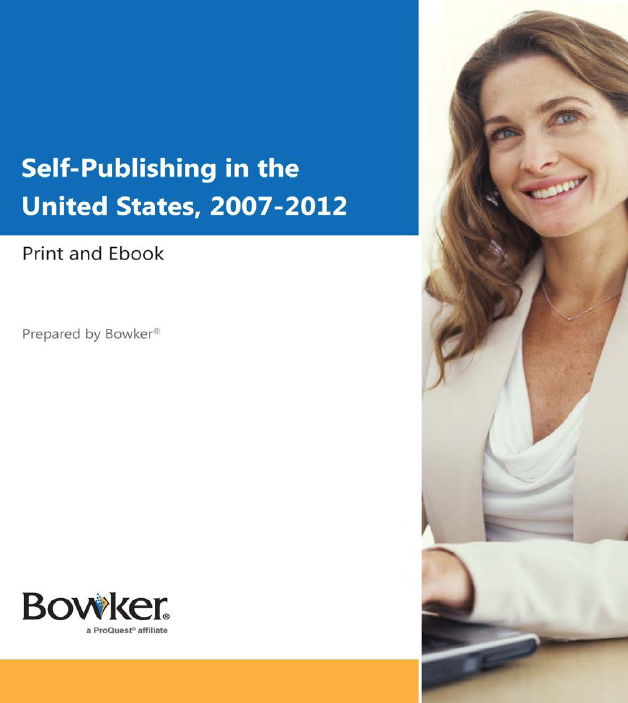 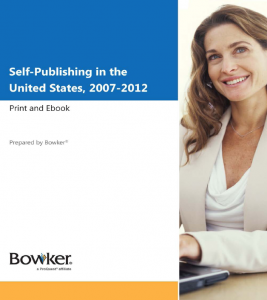 Bowker is the leading provider of bibliographic information and management solutions for the publishing industry. Last month it released a detailed six-page report on self-publishing. Self-Publishing in the United States, 2007-2012 is the result of data gathering and analysis based on ISBN output by service providers and micro-publishers in the USA over a period of six years. Although Bowker announced the release of the report in October, the full report is only now widely available for download. You can find the download link on Bowker’s website here (PDF).
No report on self-publishing today—even when it is issued by Bowker—can be based on exact science, so complex is this area of the publishing industry. For example, Bowker’s data is correlated from the ISBN output of self-publishing service providers, distributors acting as publishers and retailers, small and micro publishers (with less than ten titles and sometimes only a single author), and all that data comes from Bowker’s massive Books in Print database. The figures in the Bowker report are ISBN title counts and bear no relationship to actual sales. The nature of self-publishing, powered by the explosion of new service providers big and small, e-book distributors, more titles than ever available through print-on-demand (POD), and an increasing amount of self-published authors with their own imprints, makes it near impossible to track minutely every book sale unless everyone is following the same rules along the yellow brick road of publishing.
Before we examine some of the data below, let me emphasise that the figures only include self-published books with ISBNs. It is not known how many books are self-published today without an ISBN, distributed locally within small communities, or simply sold directly by hand or online. I suspect the figure is quite substantial—far bigger than many would care to guess at. Just consider the amount of books on Amazon Kindle or Blurb without ISBNs. Those figures are not included in Bowker’s report.
The report contains four distinct sections (1 chart each) over its six pages; combined print and e-books, print books alone, e-books alone, and a final section (3 charts) for Author Solutions (ASI) with its many branded imprints. ASI HQ in Bloomington, Indiana will be delighted to have a dedicated section! More on ASI later.
The report covers a six-year span, 2007-2012. I’m not going to dwell on previous years, but rather concentrate on 2012, the last full year of data. I’m doing this simply because the service provider landscape is diverse and it has changed considerably over previous years. Some providers didn’t deal in e-books until recently, and some have switched much of their business to e-books, or only offer a limited output from on one format or the other (print/e-book). What I have done is extract the combined print and e-book output data for the final complete year of 2012.
I’ve also indicated which service providers solely produce output in one format or the other. For some odd reason Bowker didn’t format or number position its charts in the report for ease of reading. I’ve added this in.
Here is the chart for 2012 (combined print and e-book).

It’s perhaps no surprise to find that two service providers dominate—CreateSpace hold the no.1 position (print only) and Smashwords is second (e-book only). Between them, the two account for 55% (approx.) of all ISBN output. In fact, overall, just eight different companies brought 80% of self-published titles to market. Lulu, notwithstanding the fact it supports print and e-books, is no. 3, but significantly the highest placed full-service provider by a very long way with more than four times the ISBN output of Xlibris at no 4. There follows a whole gaggle of ASI brands/imprints—positions 5 through to no. 8.
PublishAmerica comes in at no. 9 and is the second highest ranked company to solely focus on print output. I said a few paragraphs back that I would return to Author Solutions (ASI) on a particular point, and I’m including PublishAmerica in that point as well. If you check the report in the final section (page 5), where ASI data has been separated out into three individual charts, you will see a column indicating title increase (+ or -) for 2012 against the previous year, 2011. There has been a significant decline (four-figure) in ISBN output of the three major ASI brands; Xlibris, AuthorHouse and iUniverse. Some might argue that it might be the advent and rise of e-books. But I don’t buy into that idea for two reasons; one, its the same trend on print book output, and two, all ASI’s competitors are showing increases, some as much as 50%+ in 2012 compared to 2011. Instead, I’d like to think that the efforts of TIPM, ALLi (The Alliance of Independent Authors), Writer Beware and the evermore savvy self-publishing community to analyse and compare self-publishing services in the industry, and our overall message, is beginning to hit home with authors—that there are far better self-publishing alternatives than ASI brands. Also, in light of the potential for a class action lawsuit against ASI and stable owners Penguin in New York this year, those output figures will continue to decline in 2014. Some of the smaller ASI brands like Trafford, Westbow, Palibrio, Balboa and others, do show some growth, but I suspect this has more to do with some authors not being aware of the connection to ASI.
Bookbaby is at a very respectable no. 12, although it appears twice on the charts for reasons only Bowker must understand. Bookbaby Print is at no. 27, but the vast majority of its output is in e-book format. Still, it’s impressive from a recent newcomer (2010) and I think we will see Bookbaby increase growth further in the coming year.
I was actually surprised to see Blurb so highly placed (no. 14), but the company has established a serious foothold in e-books despite the fact that it predominantly became known originally for colour photo print books. Expect some major news from Blurb on the distribution front very soon, and that alone will strengthen its position and potentially make it one of the major e-book and print players alongside CreateSpace, Lulu and Smashwords. I’ve been banging Blurb’s drum for a few years now as something of a sleeping giant and I was beginning to think it was never going to stir and take the self-publishing market by the balls.
As you move down the list, you pass the providers on three-digit ISBN output. It was at this point that I started to seriously question these figures by Bowker. I can forgive the odd omission, splitting the output of others into two distinct providers (Balboa, Bookbaby), but there are some glaring omissions in the report, particularly on the e-book side. One prime example is Publish Green—a provider has a catalogue of some 1000 titles (the majority of which have assigned ISBNs from PG).
There is one other element to consider when looking at the data. I’d say every CEO of a self-publishing service provider, which supports ISBNs registered by the author, is screaming at Bowker right now—”but what about all the titles we do for authors week in-week out? Why are those titles lumped into the ‘small publisher’ category at the bottom when we carry out the same amount of work and it represents 15-50% of our ISBN output?” In fact, at over 43k titles, small publishers represent almost 10% of the total figure of output supplied by Bowker. And that includes many titles produced by providers like BookLocker, Outskirts Press, FastPencil, Mill City Press, SelfPublishing.com etc. Bowker cite Lulu and Smashwords as providing their figures for the report, but I wonder if anyone in Bowker actually thought about all this. Why ask those two to supply figures and not the rest? Surely the accuracy of any report based on data needs to be mined from the same source? I know that the output of ISBN titles from SelfPublishing.com would be far more than half the providers listed in Bowker’s report if taken as a singular output. Remember, the same is true for Smashwords and Lulu authors who self-publish. They also have the choice to use an in-house ISBN or their own!
Like I said at the outset of this article—I don’t envy the work of any organisation trying to accurately map the self-publishing landscape as best they can. None of this is an exact science and I can understand Bowker using Books in Print as the registered source for most of the data collection. I just feel we need a better system of correlating self-publishing data that doesn’t just monitor the output of ISBNs, but also monitors them at point-of-sale and feed it back to a central database. Some might rightly argue that we have reached a tipping point on the yellow brick road of self-publishing where books should not be segregated or identified by how they were published.
Perhaps that’s the biggest lesson here!

Self-Publishing Movement Continues Strong Growth in U.S., Says Bowker
2012 ISBNs show nearly 60% more self-published works than in 2011
October 9, 2013 (New Providence, NJ)A new analysis of U.S. ISBN data by ProQuest affiliate Bowker reveals that the number of self-published titles in 2012 jumped to more than 391,000, up 59 percent over 2011 and 422 percent over 2007. Ebooks continue to gain on print, comprising 40 percent of the ISBNs that were self-published in 2012, up from just 11 percent in 2007.
“The most successful self-publishers don’t view themselves as writers only, but as business owners,” said Beat Barblan, Bowker Director of Identifier Services. “They invest in their businesses, hiring experts to fill skill gaps and that’s building a thriving new service infrastructure in publishing.”
The analysis shows the growing prominence of a handful of companies that offer publishing services to individual authors. More than 80 percent of self-published titles came to market with support from just eight companies, including Smashwords and CreateSpace.
Bowker’s research on self-publishing includes surveys of authors that provide insight into where the market is going and services required by these writers. Those who intend to self-publish most often plan to bring fiction to market, followed by inspirational or spiritual works, books for children and biographies. The majority cite finding a traditional publisher as an obstacle. They also feel challenged by marketing – a hurdle that becomes bigger with increasing numbers of books in the market.
Bowker provides a spectrum of services for small publishers through resources such as www.selfpublishedauthor.com, www.myidentifiers.com and www.bookwire.com. To view Bowker’s 2012 report on self-publishing visit www.selfpublishedauthor.com.
About Bowker® www.bowker.com
Bowker is the world’s leading provider of bibliographic information and management solutions designed to help publishers, booksellers, and libraries better serve their customers. Creators of products and services that make books easier for people to discover, evaluate, order, and experience, the company also generates research and resources for publishers, helping them understand and meet the interests of readers worldwide. Bowker, a ProQuest affiliate, is the official ISBN Agency for the United States and its territories. The company is headquartered in New Providence, New Jersey, with additional operations in England and Australia.