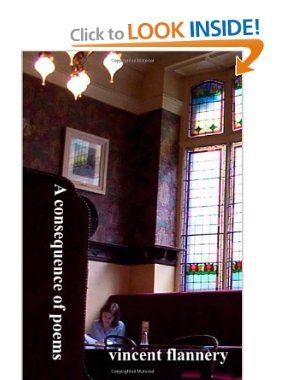 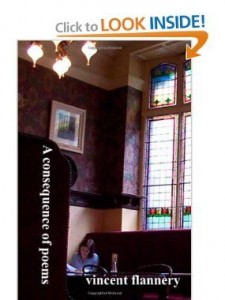 The word appearance has two meanings: one literally means to appear; the other describes what something looks like. Let’s talk about the first meaning, which is the first thing a writer thinks about: how am I going to get this book to readers?Most writers will have gone through the arduous task of sending work out to agents or, in some cases, directly to publishers. (Though very few publishers, nowadays, will accept manuscripts.) Some writers are successful and get published by the mainstream section of the book industry. 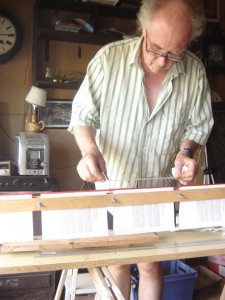 Vincent Flannery is an author and producer-presenter of the Culture Gap Program, Radio Liberté, France (Every Sunday at 15hrs.(3pm local time) Internet and podcast).

I was brought up in The Vale of Avoca, County Wicklow, Eire, made famous the world over by Thomas Moore the 19th century poet, also author of “the last rose of summer”.
The vale was also made famous by the BBC (UK TV) program “Bally Kissangel” which was made in Avoca, and if you like my book “The Quarreller’s Diary” it will be even more famous!
I was edumacated (!) by the holy Dominicans, originally made famous by the Cathars and the Inquisition. Fortunately, by the time their attention came round to me, their methods of persuasion had changed for the better.
Thinking of how I ended up now, I’m not quite so sure about that!
I suffer from chronic lack of focus, which for some, is an excuse for doing feck all. My problem was that I was doing too many things all at once, so when my writing career could have taken off, I let it be sidelined. I started writing sarcastic stuff for magazines, which took the mickey out of whoever had the nerve to pop their heads over the stockade when I was about to go to press.
That was in 1984 and it was great fun. My second burst of such nonsense was in 1995, and that was even more fun. That was when I started to draw cartoons to accompany my articles.
In 2002 I decided enough time was lost chasing my tail and I wrote the first complete book: HOTEL DE FRANCE, which related how I ended up in France. Hotel de France is now on Kindle as “A Story of Aubeterre”, with over 50 colour pics (best seen on a PC)
In September 2012 I just put up on Kindle, a book of poetry, which has been sitting around for a long time. A limited edition of handmade books was published, but then it was put on the back burner: more lack of focus!
I now also have an English Language program on French radio www.radioliberte.fr whereI talk more nonsense and some serious stuff: a section on writing and another on Old French House renovations and care. Sundays at 2pm french time, and on podcast.
Enough to keep you going for the moment.
The Independent Publishing Magazine | TIPM Media
Sharing
Authors