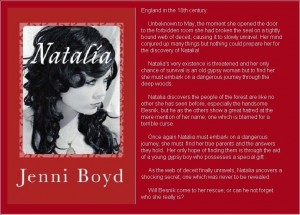 TIPM continues to receive reports of negative experiences from authors who have dealt with Raider International Publishing. Here is just one account from author, Jenni Boyd.

Hi, my name is Jenni Boyd. I wanted to share my story with other authors who have had their hopes dashed by constant rejection, forcing them to look at other options to get their book published.
My first book, Natalia, was and always will be a very special book to me. I couldn’t understand why I couldn’t get a publisher interested in my story (yes, I was naive). My partner came across an advertisement for Raider Publishing International (RPI) and this excerpt from his advertising spiel.

“It was then that I decided I would start my own publishing company that treated all of its authors with the respect that they deserve.  We are the only publisher in history to offer the author more than fifty percent of the royalties of their work.  We are also the only subsidy publisher that will arrange book events for you if you would like us to do so.  Here at Raider Publishing we care about our writers and we look forward to working with them not only as clients, but as friends.”

Obviously this gained my interest and I decided to contact Raider Publishing International. Surprisingly I got an instant response, asking me to submit my manuscript for them to assess and answer a short questionnaire. I baulked at the price RPI was asking to publish my book, so didn’t bother to respond, which sparked many emails from Adam Salviani himself, which naturally increased my reservations about dealing with the company. I decided to do a bit more research on RPI, first going to Preditors & Editors, and I found no warnings against the company there. I did a Google search and came across Mick Rooney and was encouraged by his comments. Overall I could find nothing untoward about Adam Salviani or his company, so I decided to entrust him with my manuscript, which was on 9th May 2010. Once money passed hands, I was given a Personal Assistant.
Many weeks passed and I heard nothing, so I contacted my Personal Assistant only to be informed he no longer worked for the company and I was now given a new assistant. This went on for many months and many new Assistantsuntil it was almost February 2011, and still no answer on what was happening with my manuscript. Feeling liked I had been conned, I demanded a full refund, the contract be null and void and my manuscript returned. Instantly I received a response from a ‘Vanessa’ in South Africa, saying she had attached my critiqued manuscript for my final perusal; oh my god, there were so many things that went against my schooling of punctuation for a start! I spent about a month trying to correct things, but sadly still failed. Yes I can hear your voice, ‘why the hell didn’t you pull out now?’ All I can say is I felt committed and had to follow it through. After making the final adjustments, I sent it off with my signature saying it was ready to be published.
A year had now passed and still no sign of my book being published, I hit Adam Salviani with every clause in his contract saying he had not lived up to his obligations and I would seek legal action if he did not reimburse my money. Not surprisingly, I received no response. About two weeks later, someone rang to say they saw my book on Amazon. Full of excitement, I quickly went to the site, but to my horror I found not only had they put the wrong synopsis of the book up, it also had a spelling error. I immediately contacted my Personal Assistant, but the response was that it was too late to make any changes and the book stays as is. I was later to discover it was a print on demand, so they could make changes at anytime.
Well after the deflated euphoria of having my book published, months went passed and I wondered when I was going to receive my three-monthly report as stated in the contract. I knew my book was selling because reviews were posted on various book sites. Well, now it was the end of 2011. I had not received my ten free copies, no reports, nor had I received a single cent. I’d had enough. I got my lawyer to draft a letter explaining that due to breach of contract, Raider Publishing no longer had any rights to my book.  Suddenly I received my ten free copies, but it was too late—I wanted out. Finally, Adam conceded. I knew I would never receive a cent from him, but it was a bad experience I wanted to put behind me. I wasn’t going to give up on my book, Natalia. I believed it was a good story and I still do. I made a few changes, gave it a bright red cover and published it under my own name, Jenni Boyd Books, through Amazon and CreateSpace, and now, Kobo Books. Unfortunately, that is not where the story ends. To this day Raider Publishing International still have Natalialisted as available and trying to convince booksellers that they no longer have any right to sell this edition has brought me up against many brick walls. I have contacted the booksellers personally, Lightning Source, the printer, and Data Link. I have knocked on just about every door I can think of, but still the RPI edition of Natalia is available, some sellers refuse to advertise my new revised version, and now it is 2013. To this day I have not received a cent from RPI and they still refuse to answer my emails!
So, my warnings to all those new hopeful authors; if you have been turned away from countless publishers, DON’T pay someone to publish your book, and if you see a Raider Publishing advert, don’t run, run screaming!
By the way I hold no malice towards Mick Rooney for his earlier piece that clinched my decision to go with RPI. Perhaps Adam Salviani started out with a good concept, but then he became greedy and used his experience as an author to lure in new hopefuls?

I was born in Australia and have two beautiful children; I currently reside in Tropical Far North Queensland ith my partner.

My early childhood years were spent constantly on the move and at times places remote and so isolated I used my imagination to create friends and another world.

As a young girl the castles of England, with their hidden secrets and the mystical powers of the gypsies always fascinated me and through an event that happened at the age of seven, I used all theses things to create my first book ‘Natalia’. A love story that incorporates mystery and suspense, with a surprising twist at the end.

I love the great outdoors, hitching up the camper trailer and travelling to far remote but beautiful places. The outback was my inspiration for my second book Missing, but also an element of personal experience.

Matthew Reilly would have to be one of my favourite authors, I love his use of imagination and the fast pace of his books. I would have to say he is the author who has inspired me the most, not only his writing style, but his belief in himself, his determination to get his first book out to the public, despite constant rejection, he never lost sight of his dream.

My partner and my children are my life source, my foundation, without them I am nothing.

I love anything that allows me to use my imagination and the freedom to be creative; writing, sewing and gardening.

I am new to the author world, I have no degrees under my belt, but I hope my imagination and love of writing will be enough to keep a reader enthralled enough to turn the page to the next chapter, or look forward to my next book.