The company behind the Espresso Book Machine (EBM), On Demand Books, has agreed a partnership deal with Eastman Kodak and it may prove to be the most significant move the company has ever made since the introduction of the point-of-sale print-on-demand machine in 2007.
Yesterday, On Demand Books, Eastman Kodak and ReaderLink announced a partnership that will see the Espresso Book Machine integrated with all 105,000 Kodak Picture Kiosks. Some of these kiosks are also stationed in Kodak’s Express store outlets. The inclusion of ReaderLink, a book distributor and category management service provider, is also a significant move to further establish the machine in bookstores and universities, but primarily this deal will be about putting machines into non-book trade outlets throughout North America. On Demand Books had planned to have more than 50 machines installed in outlets by the end of this year, but that figure was actually exceded earlier than expected with 60 machines by July. Nevertheless, progress has been slow since the first was installed in the New York Public Library in 2007 due to purchase and leasing costs of the machines, prohibiting many medium to small-sized retailers who might have seen the EBM’s as an answer to large inventory holding costs and as a additional consumer service at point-of-sale.
The American Book Center has EBM’s installed in both of its Dutch stores located in Amsterdam and The Hague, and their popularity and use requires regular supervision by staff and demonstrations. The ABC has invested a great deal in developing and promoting writing workshops and a full self-publishing program with no less than eight one-hour demonstrations conducted last week alone! While this kind of outlay has reaped real rewards for ABC and integrated the bookstores into the writing community, it may not appeal to some booksellers. This is not an investment the bookseller can afford to shove in a corner at the back of the store and just watch the sales roll in. 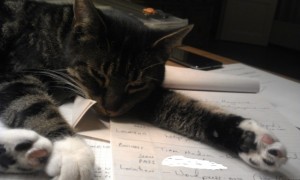 Just a couple of weeks ago I asked if the photobook was the new self-publishing phenomenon. This deal might just prove that it is. I’m also somewhat surprised more media outlets have not picked up on this press release since yesterday, with the significant exception of Digital Book World. But then, some media editors and publishing analysts are already asleep at the desk by 11am like one of my cats!

The Kodak company and its name became synonymous with photographic film for decades, and despite developing the first digital camera in 1975, ultimately Kodak shelved the new digital product fearing it would damage the sales of photographic film with its 90% share in the market. It proved to be a gross act of corporate complacency and Kodak did not reinstate a digital development program until the 1990’s. Even then, its marketing of early digital products like cameras and digital photo frames was lacklustre and non-committal, believing photographic film would never be usurped by its new digital cousin. Alas, by 2002, companies like Sony, Canon and Panasonic had stolen a real lead on Kodak. Add in the explosion of the smart phone market and its transition from chemical manufacturing to imaging services; the corporate picture – so to speak – was becoming pretty complicated and in January 2012 Kodak filed for Chapter 11 protective bankruptcy. By February, the company withdrew from manufacturing digital products and its focus now is almost entirely on digital imaging. Sound like a familiar story? It should be. Many record companies and large publishers displayed a similar arrogance and complacency in their digital market sectors.
One final caveat before we look at the full press release below. There is no mention in the press release of Kodak’s announcement last month to sell off its Film and Photo Kiosk divisions. That strikes me as a little curious considering this entire deal is based on a roll-out of EBM’s to these already installed Kodak units in retail outlets. This deal states a joint partnership venture, not a wholesale sell-off as indicated in the August press release. Maybe the devil is in the detail of the agreement.

Late today, Publishers Weekly’s Judith Rosen added the following piece after talking to On Demand Books’ Karina Mikhli. Why Rosen chose to cite Mikhli as some random ‘spokesperson’ for On Demand Books, I’ve no idea. Karina at least deserved PW to bother with the lady’s full professional title of Vice President of Content at the company:

There are still a number of kinks to be worked out, including integrating software between the book machine and the KODAK Picture Kiosks, as well as using the kiosks’ touch screen to search for available titles. In the short term the kiosks may use laptops for searches. One advantage that the kiosks offer is the ability to print four-color interiors and photo books for the first time. This is a feature that On Demand would like to be able to add for its other book machine clients over time, said Mikhli. On Demand will train a dedicated staffer to operate the book machines at the kiosks and other retail locations.

What this does at least provide is a sign that On Demand Books will take very direct control locally of the new retail installations rather than play a secondary role to Kodak’s involvement. To me, this suggests On Demand Books will now have a greater operational role in Kodak’s physical retail outlets. This is something On Demand need to take hold of if they are really to drive the success of the Espresso Book Machine.

According to Matthew Daneman of the Daily Record, On Demand CEO, Dane Neller maintains the deal was struck before the decision by Eastman Kodak to sell off the Kiosk divison in August, and hopes any new owner will continue the arrangement. Of course, one wonders why On Demand didn’t secure any such arrangement prior to signing the deal with troubled Eastman Kodak.

Press Release:
ROCHESTER, N.Y., Sept. 12, 2012 /PRNewswire/ — Eastman Kodak Company, the worldwide leader in retail imaging solutions, with a global footprint of 105,000 KODAK Picture Kiosks, On Demand Books, and ReaderLink today announced they have partnered to revolutionize the way all types of printed books will be marketed, sold and produced at point of sale. The venture brings together On Demand Books’ innovative, in-store Espresso Book Machine® to national retailers integrated with KODAK Picture Kiosks, giving consumers a full-service digital-to-print media center for all their custom print needs: from photo books, custom/local self-published titles, to educational supplements, and more.
On Demand Books is also working with ReaderLink to bring in-copyright titles to non-trade bookseller channels, allowing customers to have immediate access to a vast array of non-stocked and backlist titles at point of sale. ReaderLink is the largest full-service distributor of books in North America, distributing thousands of books to over 24,000 retail outlets across virtually all substantial mass market, club, drug and grocery chains in the United States.
The Espresso Book Machine, the only digital-to-print at retail solution on the market today, has begun to dramatically change the book industry by giving consumers the ability to produce a self-published book, or print on demand a book from more than seven million in-copyright or public domain titles, in less than four minutes. By integrating this solution with the KODAK Picture Kiosk, this capability will be expanded to produce perfect bound, high-quality Kodak Photo Books in minutes for in-store pick up.
“Our partnership with On Demand Books delivers exciting new capabilities to consumers and retailers, and is a great example of Kodak’s focus on bringing innovation to market,” said Laura Quatela, President of Kodak. “Consumers will enjoy getting from our valued retail partners immediate delivery of a whole new offering of high-quality photo books as well as a broad library of book titles. In addition, our retail partners will have new avenues for increased revenue as they expand their photo book sales in-store and deliver a massive list of book titles to their customers instantly.”
Dane Neller, CEO of On Demand Books adds, “We are thrilled to be able to work with ReaderLink and our publisher partners to bring a broad list of book titles to Kodak’s vast, worldwide retail footprint and expand the capabilities of the Espresso Book Machine to produce photo books. We envision an integrated solution that can substantially redefine the publishing industry and bring exciting new solutions to customers.”
The partnership will involve North American retailers during 2012 and then expand internationally in 2013. The integrated KODAK Picture Kiosk and On Demand Books solution will include the following features and functionality:
Kodak has a market leadership position in the photo category with worldwide installations of kiosks with national retailers such as CVS/pharmacy in the US, DM in Germany and Officeworks in Australia, among many others.
About Kodak
As the world’s foremost imaging innovator, Kodak helps consumers, businesses, and creative professionals unleash the power of pictures and printing to enrich their lives.
(Kodak is a trademark of Eastman Kodak Company).
About On Demand Books
On Demand Books was cofounded in 2003 by Jason Epstein, former Editorial Director of Random House; Dane Neller, former CEO of Dean & DeLuca; and Thor Sigvaldason, former technology consultant at PricewaterhouseCoopers. Espresso Book Machines have been placed in bookstores, libraries, universities, and other locations in the USA, Canada, the UK, the Middle East, Asia, Australia, and the Caribbean. Made in the USA, Espresso Book Machines are environmentally efficient, reducing production, shipping, and waste. For more information, go to www.ondemandbooks.com.
About ReaderLink
ReaderLink Distribution Services, LLC is the largest full-service book distributor in the North America and is a recognized leader in distribution logistics, value-added category management services, field services and business analytics. ReaderLink is located in Oak Brook, IL. For more information, go to www.readerlink.com.