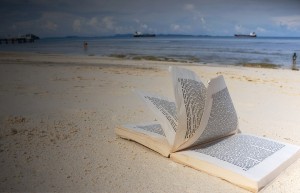 Philip Jones lit the match again in the latest episode of Radio Litopia’s The Naked Book, featuring a discussion entitled, In The Land Of The E, The Glassy-Eyed Are King. In this episode, Jones is joined by Barry Eisler, a successful US author who has combined both legacy and self-publishing; literary agent Piers Blofeld; author, journalist and self-professed ‘guardian’ (and Guardian UK blogger) of all things great and good in traditional publishing and European literary culture, Ewan Morrison; and Jones is also capably assisted on the podcast battlefield by, Sam Missingham, co-host and co-founder of The Bookseller’s digital edition, FutureBook.

“Imagine if you will the final moments of Bugsy Malone, as reinvented for radio. That was this week’s Naked Book with authors Ewan Morrison and Barry Eisler slinging pies across Skype, as they sought to articulate a future for authors with or without publishers.

Attempting to bat them out of the park was cricketer and agent Piers Blofeld; while host Philip Jones, played umpire. “If you all talk at once no-one will hear you scream.”

The subject, as if it mattered, was whether the e-self-publishing bubble was about to burst, drenching everyone in its sticky frothy sputum. A view Morrison has expounded in two widely-read Guardian blogs.”

From Radio Litopia’s Prequel to the battle
The episode may have been entitled, “In The Land Of The E, The Glassy-Eyed Are King,” but I’d suggest the only ones glassy-eyed in the land were its listeners – punchdrunk and swollen from this heady debate, which – like Morrison’s Guardian pieces – managed to steer the debate, too often, into an ‘idealogical battle,’ or rather, Morrison’s idealogical battle to set legacy publishing against self-publishing, paper against digital, and traditional marketing against social media marketing. When Eisler proclaimed early on that we’re all one big community and self-publishing is just one path an author can choose to take, and how Amazon has provided a powerful outlet for some authors; Morrison was quick to derail things and steer the debate into a ‘handbags at dawn’ and Europe is a nicer place to live and be an author than that nasty place America with its corporate tax-dodgers and ‘writing should be a business’ idealogical mumbo-jumbo.
As a literary agent, Blofeld kept his cricket bat under the table where it belonged, argued salient points about how much of the submitted material he gets is just not up to par, but accepted self-publishing had its place in the universe and countered Eisler’s grand vision of an open future for all authors with uncertaincy. Blofeld in his experience and passion for the industry he works within is of course right. Nothing is certain about the future of publishing, other than the fact that it is changing and publishers are having a hard time getting to grips with this new landscape.
Morrison managed to splinter and crack quite a few of his cricket bats, but, then, that’s Morrison’s universe – swing a few shots, and if you miss the target and break one during the battle to preserve the legacy with jam and culture, grab another bat and swing harder. The worst thing about Morrison’s arguments about the value of legacy publishing is that he damages so much of what underpins it and is valid about it with casual generalisations that make no sense once placed in the greater context of what is going on in the publishing world at the moment. He seems transfixed in his own self-created spotlight and the ideology of what publishing once was, and is happy to seize upon any point of reference – no matter how shaky – to preserve and falsify that belief. It’s almost like there is a part of Morrison that wants – needs – to sabotage his own reasoned arguments.

All this Naked Book stuff put me mind of Garrison Keillor words when he wrote in the New York Times during 2010, in the run up to that year’s Book Expo America taking place a few week’s later. Keillor wrote:

“Children, I am an author who used to type a book manuscript on a manual typewriter. Yes, I did. And mailed it to a New York publisher in a big manila envelope with actual postage stamps on it. And kept a carbon copy for myself. I waited for a month or so and then got an acceptance letter in the mail. It was typed on paper. They offered to pay me a large sum of money. I read it over and over and ran up and down the rows of corn whooping. It was beautiful, the Old Era. I’m sorry you missed it.”

Keillor was of course addressing a breed of writers, secure with new technology, the growth of the ebook, but mostly about the ease writers can now – in his mind – ‘publish’ a book without once engaging with the world of publishing he grew up with. Morrison and the champions of legacy publishing will always point to the gatekeeping culture which still preserves much of the publishing industry and delivers its stamp of quality.
I’ll quote some more from Keillor and that New York Times piece of 2010 because never was it more poinant (my bold below):

“Call me a pessimist, call me Ishmael, but I think that book publishing is about to slide into the sea. We live in a literate time, and our children are writing up a storm, often combining letters and numerals (U R 2 1derful), blogging like crazy, reading for hours off their little screens, surfing around from Henry James to Jesse James to the epistle of James to pajamas to Obama to Alabama to Alanon to non-sequiturs, sequins, penguins, penal institutions, and it’s all free, and you read freely, you’re not committed to anything the way you are when you shell out $30 for a book, you’re like a hummingbird in an endless meadow of flowers.”

Beautiful words from one of the grand old men of modern American literature, capturing a time of change in the publishing world, and, yet, with a great deal of sentiment. Importantly, the words are not tarnished with obstinance, finger-pointing or a desperate lunge for cricket bats or isolated and generalised arguments. In fact, Keillor returns to the sancity of the craft of writing itself for solace from the slide into the sea. Looking back at the article I wrote on the subject of self-publishing and the changes in the industry; some of my comments seem harsh on Keillor, so I’d prefare to let it stand as it was then, and quote the last piece I wrote to conclude the article:

“Keillor remarks despondently that publishing is ‘slipping into the sea’, but I would suggest, we are all aboard the vessel, and the waters were always there. It is time we learned how to sail this damn thing. Ironically, I believe it was in Keillor’s most famous ‘Lake Wobegon Days,’ he writes about losing the best manuscript he ever wrote on a train. It brought to mind, when I read Keillor’s piece last week, how in the 1980’s – the time I read his novel Lake Wobegon Days – that a few years later I would lose all of my second self-published book when the hard drive of the first ever word processor I owned gave up the ghost, and I too lost something very precious, having to trust upon my own mind and the fortitude to resurrect it a year or two later from memory.”

While publishing – as it is now – is not about the sinking of the Titanic; some would like you to believe that it is better to let it sink to the bottom of the sea and take nothing of what we have learned and simply reflect on what publishing once was or might have been.
It is what it is.
I’d prefer to think that we are all still aboard the same vessel when we head away from the iceberg – not arguing who got a ticket, how we got a ticket, how much we paid for it, what class berth we are staying in, and whether we all deserve a place in the lifeboats as Captain Morrison would like. Morrison is right about one thing – publishing was once about culture and curation; what was the very best of literature, and preserving an elite, unique and celebrated experience. What Morrison doesn’t get is that publishing – its legacy now – has quickly become more about the celebration of identity and elitism of itself. It is this very same cricket bat he grips to beat those who adopt a ‘brand,’ choose the path of self-publishing (often digital publishing), and promote themselves through the free platforms of social media.
What was missing from The Naked Book debate in this episode was not enough talk about what readers meant to authors on the E landscape, rather than the value of publishers or the method of publishing, because the future of publishing will be dictated by what the readers want, expect and how authors and publishers together are best placed to help those readers discover and deliver content. It is interesting the studio discussion began with reference to the monolithic presence of Amazon in the publishing world without anyone ever accepting that Amazon is there by default as much as decision and ultimately seized a position in the retail and later digital market that publishers chose to vacate.
It’s time to lift the anchor and set sail on a new ocean, and, above all, to leave the idealogical battle of who owns publishing and who should be a part of it to the theologians, moralists and purists who see publishing as some preserve of backwater academia and the dust covering books never to be read again.
Books were meant to be read. Let the readers in this new age be the new historians editors, curators and champions – just as they always believed they were.

You can hear the full hour podcast of this Radio Litopia episode below: