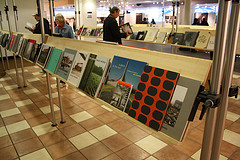 This morning the Independent UK has a piece entitled, Do we still have a thirst for coffee table books? written by Tim Walker. The piece looks at the continued success of the Quarto publishing group, famous for its large-format, illustrated titles and coffee table books. Walker’s piece even goes as far as to suggest that such books could be ‘physical publishing’s last, best hope.’ which could, in fact, be physical publishing’s last, best hope. Laurence Orbach is founder and CEO of Quarto and he recently told The Bookseller that “the book- publishing ecosystem has been sundered” by the digital revolution.

The same piece in the Independent UK also cites The Bookseller’s features editor, Tom Tivnan, with the following observation:


“Illustrated books and art books have withstood the digital decline that the rest of the industry is facing. The ‘beautiful’ books are the print books that will survive in the digital age. The latest figures figures suggest, for example, that sales of individual monograph art books were up 70 per cent last year.”

Some publishers have chosen to outsource the printing of illustrated books to manufacturers in the Far East because the costs are cheaper and the quality of books remains high, despite the obvious ecological and labour issues. Indeed, Pearson’s recent acquisition of self-publishing provider, ASI (Author Solutions), raised a similar issue in some quarters due to the company employing a large number of its workforce in the Philippines..
I don’t think we have reached the endgame Quarto’s CEO, Laurence Orbach, suggests we could reach for physical book publishing or that illustrated books represent the ‘last, best hope’ for publishers. However, I do think we are seeing a real revival in the coffee table book as a direct result of the digital revolution in publishing. This revival has never been clearer in the world of self-publishing providers. Their direct marketing often plays upon the romance of books being a part of the author’s world – and in a way that makes the physical book an experience, unique and apart from the experience of publishing an ebook.
As a publishing consultant, I often advise authors to begin with e-self-publishing, rather than undertake the more expensive physical route, particularly if I believe an author has quite a way to go to build an author brand, as well as defining and reaching their readership. Many authors still treat this approach with hesitancy and consider the advice adverse to their wishes and publishing needs. Books in ebook form remain relatively new to many authors, and unless you are an author under 12 years of age, you’ve grown up with the romance and experience of the book in its physical form. This kind of advice is obviously not something I’d give to an author wishing to publish an illustrated book or photographic book.
While publishers continue to get to grips with the digital revolution, some self-publishing providers continue to ride on a wave of success, particularly providers like Blurb and Lulu, which offer specific photobook services. I’ve said elsewhere on The Independent Publishing Magazine that providers heavily reliant on physical book production models (including systems like print-on-demand) may soon begin to see a downturn in profits over the coming years as more authors turn to DIY self-publishing services and ebook-only platforms like Amazon’s Kindle and Smashwords. It’s no coincidence that we have seen a marked increase in photo and image cloud services like Flickr, Instagram and Picasa. We are living in a highly image-laden world and we may be about to see the written word concede considerable ground to the visual image.
Post anything up to your Facebook or Google+ account and you can be assured the ones with photographs or graphic images will garner the most interest and traffic. The social network Pinterest has built its entire platform around the visual image. Sometimes a few words along with a strong image can deliver a more powerful message than a thousand words.
Blurb may have began life as a dedicated self-publishing service for photographers and graphic artists to produce portfolios of their work, and while it has now developed into more a more conventional publishing service for authors as well, like CreateSpace and Lulu, the photo self-publishing arena is becoming pretty crowded in the last couple of years. Even the grand king of self-publishing providers and darling of the POD publishing world, Ingram’s Lightning Source, has recently begun to seriously upgrade its print machinery and colour book services.
There are now a multitude of photographic book production services online and all of them appeal to Joe and Josephine Plumber (remember Joe the Plumber!) and not just artists and writers. Here are just a few:
Blurb
Viovio
Asuka Book
Picaboo
My Publisher
Mixbook
Pixum
Clickonprint
Vistaprint
I doubt if too many of the services above will diversify into what we might call ‘standard’ self-publishing in the way Blurb has, but many do offer two great strengths – the advertising is mainly directed outside of artist and writer networks; they appeal not just to Joe the Plumber, but to a young generation of people comfortable with technology and with a daily life captured and frozen by the power of the visual story behind an image.
While I still have high hopes for the spread and popularity of OnDemand‘s EBM (Espresso Book Machine) in every bookstore, pharmacy and newsstore, I’m not convinced it will ever achieve the popularity of dedicated photobook machines or services in the same outlets. Just before I read the Independent UK piece I referred to at the start of this article, I watched an advertisement on national TV by the Netherland’s largest supermarket chain, Albert Heijn, offering a 48 hour delivery photobook service. Several of the photobook services I’ve just listed in this article also advertise on national TV networks throughout the world. I’ll leave you with a couple of those TV adverts and we can ponder on whether we will see such mass advertising over the coming years for standard self-publishing providers. Maybe right now there is an executive or CEO on the phone to arrange a new partnership with a major supermarket chain!