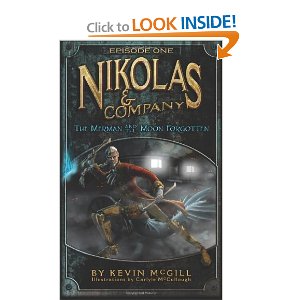 An imaginative book trailer by Dallas-based children’s fantasy author, Kevin McGill has captured interest beyond his home and locale. McGill quite literally launched his first book, Nikolas and Company: The Merman and The Moon Forgotten, into space aboard a high altitude balloon.
He explained his motivation and his unique marketing idea during the launch of the book in April this year; “I wanted to show every fourteen-year-old boy and girl out there that a book can take them anywhere.” His brand slogan is ‘A book…can take you anywhere.’ It certainly worked and the story was soon picked up by a local CBS TV network.

McGill used CreateSpace to print and publish his book (his second with CS) and has a further two books planned in this fantasy adventure series and with the help of several friends to build his author brand, together with a promise to give away 1000 signed copies of his book to children between 9 and 13 years of age, it looks like the only way is upward and onward for the author.
Kevin McGill is the mad writer of the Nikolas & Company series where the Moon is much more than we think, mermen walk on automaton legs and 14-year-old boys talk to cities in their heads. When not spinning Lunar yarns, Kevin hosts a weekly books podcast Guys Can Read along with his college buddy and co-host, Luke Navarro. McGill co-founded the podcast two years ago when he and Navarro, a former college roommate, were discussing books they loved. McGill said, “We realized there wasn’t a podcast at that time where men were discussing books – so we decided to start one.” The program is a weekly book discussion and podcast from a guy’s perspective. The GCR website features recently read books and recommended books, as well as best-selling authors such as R. A. Salvatore and Daniel H. Wilson.

Infographic: How to Get Reviews for Your Book