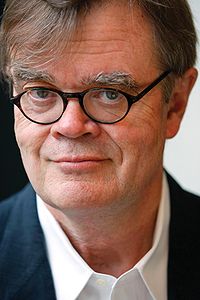 Just before Book Expo 2010 last week, American novelist and Radio raconteur Garrison Keillor wrote an opinion piece in the New York Times entitled, The End of an Era in Publishing. I should of course refer to the opinion piece as an ‘op-ed’ (opposite editorial), the description of it by many critics who chose to quickly round on Keillor in the subsequent days through printed column inches—but in particular—through chunks of web bytes with snarling teeth. If I did refer to it as an ‘op-ed’, I might, too, find myself laid bare to the dentures of the Prairie Coyote from Minnesota.

“I grew up on the windswept plains with my nose in a book, so I am awestruck in the presence of book people, even though I have written a couple books myself. These are anti-elitist times, when mobs are calling for the downfall of pointy-head intellectuals who dare tell decent people what to think, but I admire the elite. I’m not one of them — I’m a deadline writer, my car has 150,000 miles on it — but I’m sorry about their downfall.”

Keillor oozes sympathy for the ‘pointy-head intellectuals’ and their perceived demise – one can only deduce that he is referring to the elitist giants of the US book world – if you like, the Henry James’ and Truman Capotes’ of the literary establishment. I do not believe for a minute that Keillor is not expressing an innate modesty and awkwardness that the New York publishing world has introduced him to over many years since he placed the first of his typed manuscripts into a brown manila envelope and mailed it off with the required return postage stamps to some large publishing house on Fifth Avenue.
Keillor, in his opinion piece, reflects on such an early episode, described above, by addressing modern authors setting out in the publishing world, as ‘Children’. Like the young Keillor in 1969, they are also filled with the same aspirations of making writing their career as well as their love and devotion.

“I waited for a month or so and then got an acceptance letter in the mail. It was typed on paper. They offered to pay me a large sum of money. I read it over and over and ran up and down the rows of corn whooping. It was beautiful, the Old Era. I’m sorry you missed it.”

We are sorry we missed it too, Garrison; except, maybe, not as deeply as you still miss it. You see, we don’t deal with the publishing world you dealt with, and so, because we didn’t know it, we find it hard to miss it—thought, we’d love to miss that kind of publishing world. You know—the one where you send a typed manuscript off to a large New York publisher without the need of an agent—and hey presto—they actually read it and one month later, you get a publishing contract and an advance bigger than you could ever imagine. Mind, we do know such a world—but, you see, it’s make-believe. It was started by companies like Vantage Press and Dorrance Publishing. You might know these companies (oops, publishers), they might even have advertised in the New York Times and Baltimore when you were also getting a foot-hold in publishing books and writing articles for the print media. Except, back then, you got a cheque, and we got a garage full of books that cost us $5000. But, hell, we shared the same dream—for a while, anyhow.

“Call me a pessimist, call me Ishmael, but I think that book publishing is about to slide into the sea. We live in a literate time, and our children are writing up a storm, often combining letters and numerals (U R 2 1derful), blogging like crazy, reading for hours off their little screens, surfing around from Henry James to Jesse James to the epistle of James to pajamas to Obama to Alabama to Alanon to non-sequiturs, sequins, penguins, penal institutions, and it’s all free, and you read freely, you’re not committed to anything the way you are when you shell out $30 for a book, you’re like a hummingbird in an endless meadow of flowers.”

If you are a plumber, you see the world through a plumber’s eyes. If you are a writer, you see the world through a writer’s eyes. It doesn’t matter what era you live in. If you are a president, you see the world through a president’s eyes—just don’t try to deliver your message through the eyes of a plumber. That mistake was made once before—no matter how humble and homespun you try to appear—you’re still the president!
Keillor really did decide to walk the plank when he broached self-publishing and the perils it would bring the so-called world of elitist publishing. This was a case of Joe the Plumber knowing as much about politics as Bush knew about fixing a leaking tap. To be fair to Keillor—I think he had ebooks more in his mind when he wrote the following—Keillor is right about one thing, and that is how self-publishing owes a great debt to the rise in the Internet and how social media really works – though maybe Keillor doesn’t think it works. Reading this next quote from Keillor, it looks like he saw the episode on South Park about Facebook!

“And if you want to write, you just write and publish yourself. No need to ask permission, just open a Web site. And if you want to write a book, you just write it, send it to Lulu.com or BookSurge at Amazon or PubIt or ExLibris and you’ve got yourself an e-book. No problem. And that is the future of publishing: 18 million authors in America, each with an average of 14 readers, eight of whom are blood relatives. Average annual earnings: $1.75.”

I am not sure how upstate Keillor actually is on self-publishing, Booksurge is no more—now part of CreateSpace, ExLibris is supposedly Xlibris (you really think the NYT’s editor might have caught this one), and PubIt is not fully operational with Barnes & Noble yet. I wonder if Keillor is a shadow and non-participating member of the self-publishing world or was he simply fed these casual sound bytes for his opinion piece?

Self-publishing will destroy the aura of martyrdom that writers have enjoyed for centuries. Tortured geniuses, rejected by publishers, etc., etc. If you publish yourself, this doesn’t work anymore, alas.”

Again, I sense Keillor is directly equating self-publishing with online ebooks alone. But is this not also one of the great criticisms of the book publishing world as a whole—the lip-service to the development of ebooks underlined by the preservation of print books through any model and at any cost? (think Kindle against iBookstore and the arguments on pricing that will ensue over the coming weeks – it’s already started)
Keillor remarks despondently that publishing is ‘slipping into the sea’, but I would suggest, we are all aboard the vessel, and the waters were always there. It is time we learned how to sail this damn thing. Ironically, I believe it was in Keillor’s most famous ‘Lake Wobegon Days’, he writes about losing the best manuscript he ever wrote on a train. It brought to mind, when I read Keillor’s piece last week, how in the 1980’s – the time I read his novel Lake Wobegon Days – that a few years later I would lose all of my second self-published book when the hard drive of the first ever world processor I owned gave up the ghost, and I too lost something very precious, having to trust upon my own mind and the fortitude to resurrect it a year or two later from memory.
Some things really never change.
Garrison Keillor was born in Anoka, Minnesota, the son of Grace Ruth (née Denham) and John Philip Keillor, who was a carpenter and postal worker. He was raised in a family belonging to the Plymouth Brethren, a fundamentalist Christian denomination he has since left. He is six feet, three inches (1.9 m) tall and has Scottish ancestry. Keillor is a member of the Democratic-Farmer-Labor Party. In 2006 he told Christianity Today that he was attending an Episcopalian church in Saint Paul, after previously attending a Lutheran church in New York. His religious roots are frequently worked into his material: he often remarks that most Minnesotans, being of German or Scandinavian descent, are Lutherans. He graduated from the University of Minnesota with a bachelor’s degree in English in 1966. While there, he began his broadcasting career on the student-operated radio station known today as Radio K.
A Prairie Home Companion regularly goes on the road and is broadcast live from popular venues around the United States, often featuring local celebrities and skits incorporating local color. Keillor also sometimes gives broadcast performances of a similar nature that don’t carry the “Prairie Home Companion” brand, as in his 2008 appearance at the Oregon Bach Festival.
Keillor is also the host of The Writer’s Almanac which, like A Prairie Home Companion, is produced and distributed by American Public Media. The Writer’s Almanac is also available online and via daily e-mail installments by subscription.
Keillor has written numerous magazine and newspaper articles, and over a dozen books for adults as well as children. In addition to The New Yorker, he has written for The Atlantic Monthly and Salon.com.
He also authored an advice column at Salon.com under the name “Mr. Blue.” Following a heart operation, he resigned on September 4, 2001, his last column titled “Every dog has his day”
In 2007, Keillor wrote a column that in part criticized “stereotypical” gay parents, who he said were “sardonic fellows with fussy hair who live in over-decorated apartments with a striped sofa and a small weird dog and who worship campy performers.” In response to the strong reactions of many readers, Keillor said
I live in a small world — the world of entertainment, musicians, writers — in which gayness is as common as having brown eyes…. And in that small world, we talk openly and we kid each other a lot. But in the larger world, gayness is controversial…and so gay people feel besieged to some degree and rightly so…. My column spoke as we would speak in my small world and it was read by people in the larger world and thus the misunderstanding.
Lake Wobegon Days (1985), ISBN
Leaving Home (1987)
We Are Still Married (1989)
Wobegon Boy (1997)
Lake Wobegon Summer 1956 (2001)
In Search of Lake Wobegon (2001)
Pontoon: A Novel of Lake Wobegon (2007)
Liberty: A Novel of Lake Wobegon (2008)
Life among the Lutherans (2009)
Pilgrims: A Wobegon Romance (2009)
Happy to be Here (1981)
WLT: A Radio Romance (1991)
A Visit to Mark Twain’s House audio (1992)
The Book of Guys (1993)
The Sandy Bottom Orchestra (with Jenny Lind Nilsson, 1996)
Me, by Jimmy “Big Boy” Valente (1999)
Good Poems (2002)
Love Me (2003)
Homegrown Democrat (2004)
Good Poems for Hard Times (2005)
77 Love Sonnets (2009)
A Christmas Blizzard (2009)
The Independent Publishing Magazine | TIPM Media
Sharing
Authors