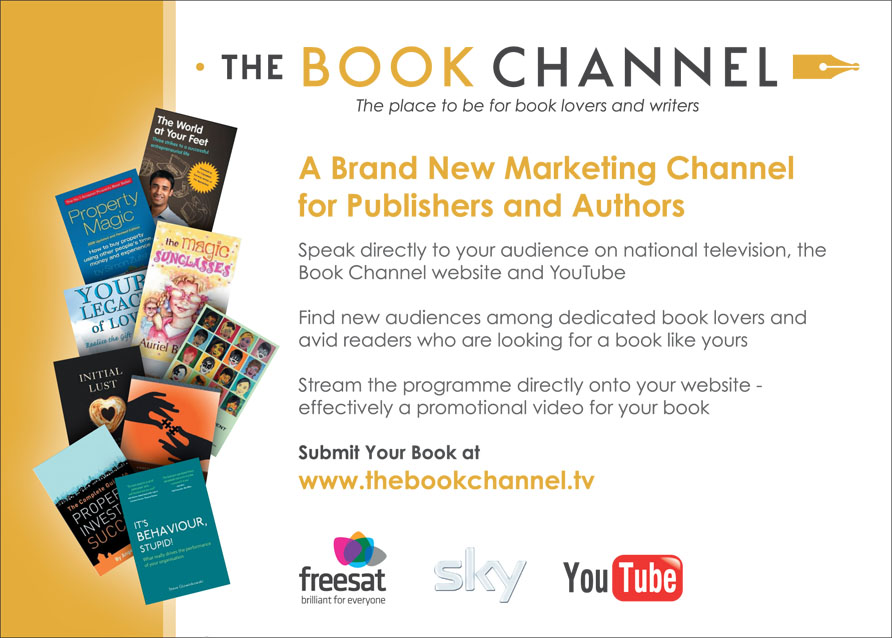 The Book Channel is a satellite TV channel that launched in 2009 and broadcasts its show three times a week on SKY and Freesat, as well as on their Youtube channel and website. Each show is presented by author Tina Bettison and features three interviews with authors talking about their books and there is also a slot for writing a book and getting it published. The Book Channel was the idea of ex-ITV program-maker Richard Flewitt, Fred Perkins, CEO of Information TV, and Paul Hammond, a business entrepreneur.

From the promotional flyer for Book Channel TV:

“The benefits:
Authors have an extremely high broadcast quality video to promote their book at less than the cost of doing a home video.
Authors are promoted through the book channel internationally to new audiences, through internet marketing, viral messaging, PR and TV.
Authors can refer to the interview through bloggs, twitter, micro websites, YouTube, press releases that the video is available


The book can be advertised to book shops as going to be on TV driving early sales and stand positioning.


Publishers can actively promote getting their authors on television.*
(*The Book Channel reserve the right to not broadcast unsuitable or inappropriate material.)
Publishers will also receive a license to use the content on other websites to promote the book.
Videos are being actively encouraged by Amazon and Borders for their websites.
Publishers working with us can also come on as the expert providing advice.


Filming:
Takes place twice per month
Books will be selected as appropriate to provide a balanced programme
Filming takes place near Nottingham. Closest train station is Grantham (just over 1 hour from London) where a taxi can pick up the author and transfer them.
Transportation costs are the responsibility of the author


Cost is only £990 + vat, which for a high broadcast quality video interview is excellent. See for yourself at www.thebookchannel.tv

NB; No refund is provided for authors that cancel although we will endeavour to move to the next available filming dates or you can transfer the slot to another appropriate book on the same day.”

“International applications are accepted although you will have to be in the UK on one of our filming dates.”

Flewitt came up with the idea for Book Channel TV because of the saturation of celebrity book reviews on TV and the lack of deserving space for less well-known authors and their books. The book review/interview slots are essentially paid marketing segments for authors and publishers, and less actual book reviews. I don’t see Tina Bettison telling an author, ‘Your book is shit‘ after that author or their publisher has forked out £990+vat!
The Book Channel do say submission of books is free (gee, thanks) and those submissions will be screened and reviewed for possible inclusion. Successful applicants will then be contacted and a film date organised at their Nottingham studio location. It should be noted the above detailed flyer about fees did not come from the Book Channel TV site itself, but from Flewitt’s page on ecademy.com, a business network site.
After four shows (12 marketing slots), the most notable publishers to have taken part are HarperCollins, Marshall Cavendish, Michael Joseph (Penguin), and Phoenix (Orion Publishing). All of these previous publishers were part of the fourth and last show to be aired. The previous three shows featured the following publishers;  Childrens World Publishing  (one book, one author, one company – see the link), Word4Word (small indie press/author resources), Ecademy Press (fee-charging co-operative publishing service) and Live Consciously (one book, one author, one company). Ecademy and Word4Word accounted for six of the twelve featured books and authors.
There are a few things we can glean. This remains a relatively new endeavor, but with a great deal of potential, and I entirely accept that putting together a TV slot on SKY satellite is going to run into a four figure amount, even  for a 30 minute program, so maybe £990+vat for an author is not so expensive, but then, the guidelines for the Book Channel TV tell us you don’t just ‘pay your money and off you go on TV’ – only some submission applicants are successful – if you call shifting £990+vat out of your back pocket a successful move. The finished licensed video given to an author using this service could be a very significant crowbar to leverage promotion of their book and drive sales – that cannot be in doubt.
Here is the caveat and what to ponder on. Is this simply vanity publishing for TV? The fact the last show featured all commercial publishing houses and the other three shows featured authors who may have self-published or used a publishing service or are linked to a business suggests not. In fact, with commercial publishing houses like HarperCollins, Penguin (its imprints), Marshall Cavendish and Orion (its imprints) getting on board, if anything, there is the possibility the small guys and the self-publishing guys might get entirely pushed out if the commercial publishing houses see this as an ideal opportunity for their less well-known authors to gain TV exposure, and at £990+vat, that is a pretty good return for a marketing department at a large house.
If you visit the Book Channel TV website, have a close look at the advertising blocks below the header and to the right. AuthorHouse are never too far away when there is a new gig in town. If anything, they are the most prominent purchaser of advert space on the site at the moment. Remember the price charged – £990+vat, so if you start seeing ‘Get your book and author interview on TV‘ packages appearing on the AuthorHouse site, or any other author solutions service, beware of what you are being asked to pay for it.
The Book Channel TV show will be at the London Book Fair, no doubt looking to fill their forthcoming author interview slots, but they will also be covering events at the Fair on Tuesday and Wednesday. The two shows planned will be broadcast over the first two weeks of May.
The Independent Publishing Magazine | TIPM Media
Sharing
Authors