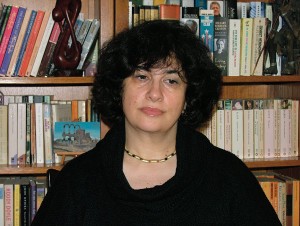 Choghig Kazandjian grew up in Lebanon during the civil war and like any young person growing up in a war-torn region; her early years had an extraordinary and powerful impact on her life. Some choose to bury those experiences, escape the conflict as Kazandjian eventually did, and only visit the memories in her own private moments. Kazandjian did not. Instead, her experiences growing up in Lebanon became, The lost I, a book she first had published with Shalom Publications in Dubai, her new home.

‘It was when I moved to Dubai that I thought seriously of writing. I came across an advertisement for Writers’ News in one of the local English newspapers. I subscribed to it and before I knew it I was on the Home Study course. It was an on and off thing for me, since I had to teach full time, and raise my two children.

When I read the response of my then tutor Stuart Palmer to my last assignment it really changed my life. He wrote, and I quote, ‘This is stunning writing. It is powerful and emotional, really and truly gripping stuff.’ It was June 2001 when I sat down to write the book. I had the first two chapters and the last two. I knew where to go but how to reach there was what I had to work on.

The book was first published in Dubai in April 2004. Unfortunately the publisher faced some distribution problems and it was only sold in two local bookstores. It was after I moved to Canada that I approached a publisher in New York to self-publish the same book.”

When Kazandjian moved to Montreal, Canada, she began to consider how she might re-publish her book. The rights for her book had reverted back to her and she ultimately approached New York-based author solutions service, Raider International Publishing. The Lost I finally saw its second coming in October 2009 and the acclaim and reception brought about a feature and an interview with CTV in Montreal.

‘Growing up in Lebanon during the civil war was not easy. Throughout the years I had all these experiences, these thoughts and fears and memories playing in my mind that I knew I had to do something about.

The events of the story take place in Lebanon during the civil war. It shows the impact of war on innocent civilians. It is about civilians caught in the cross fire of soldiers or militia, combatants. The main characters of the story are a newly-wed, nonpartisan couple, Nayla and Samer, ordinary people, very much in love, who struggle to live as normal a life as possible. It shows in gut-wrenching detail how this psychic hurricane, civil war, sweeps through the lives of this couple and the people around them.

As the story continues and the fighting escalates, they find themselves more and more in the basement of their building hiding from falling bombs, living near death experiences until it becomes so unbearable that they have no choice but to leave the country. Then the uncertainty; of whether they will survive or where they will go, hence the title The Lost I — I for the self, I for the identity.’

This has been an extraordinary journey for book as well as author and I cannot help feeling with a skilled agent it would have easily graced the lists of many mainstream publishers, but for now, that is their loss, and self-publishing’s flag to wave.
The Independent Publishing Magazine | TIPM Media
Sharing
Authors