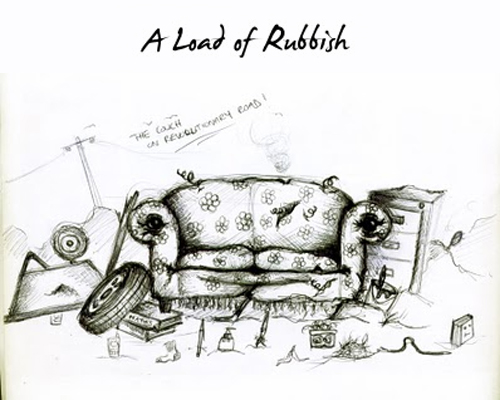 Seamus is an ordinary shoe but it is going to take an extraordinary courage to fight for his friends and stand up for the dump he now calls home.

I have written before on HarperCollins’ answer to the slush pile in the form of Authonomy. However, I cannot pass up a national calling! The extract above was from the blurb of  ‘A load of Rubblish’, a children’s book, written by Irish author, Helena Duggan, a graphic designer from Kilkenny, Ireland. At the moment, Duggan’s book is rated fourth by her fellow Authonomy writers in her bid at the end of this month to make the editor’s desk at HarperCollins. Like all Authonomy registered authors, she is looking for their collective votes.

“I have been writing on and off for years but it was during a couple of years away traveling that I discovered my little friends and began my story.”

Duggan on how the tale of Seamus the shoe began.

Her full blurb for the book follows:

Seamus is an ordinary school shoe who through his silly curiosity, finds himself thrust from a truck into a world of rubbish he never knew existed.
Although inherently shy and lost without the aid of his outgoing Brother Charlie (right shoe), he must find his feet, so to speak, in this wasteland. From Credit Limits, to the Triple R Treaty, and the undercurrent of racism towards the Breeders, Seamus has a lot to take in. However, with the aid of a repertoire of colourful new friends, he begins to settle.
It is only when KP, a beautiful newspaper who has journalistic aspirations reappears mysteriously and hands Seamus a cryptic message that things begin to go askew. The dump dream begins to disintegrate around him as he discovers flaws in the apparent transparency of the credit system, makes dangerous enemies in high rankings of society and comes face to face with Adam and his army; a rat whose lineage can be traced back to the beginnings of creation.
Seamus is an ordinary shoe but it is going to take an extraordinary courage to fight for his friends and stand up for the dump he now calls home.
The Independent Publishing Magazine | TIPM Media
Sharing
Authors