It has taken quite a while for HarperCollins‘ author network site Authonomy to prove successful for its many registered writers. The last acquisitions purportedly to come from Authonomy’s manuscript piles were the three original acquisitions announced shortly after the website’s inception.

Today’s news that Terence O’Neill’s manuscript, originally titled, Never Again, is to be published in March by Harper Element with the new title, Someone to Love Us. According to Authonomy’s sister site, Inkpop, O’Neill’s memoir was actually acquired by Harper Element shortly before last Christmas. If we are to believe the dates of acquisition and date of publication, March 4th, 2010, that is a pretty extraordinary turnaround time for a book in this day and age – less than twelve weeks! Considering the fact it is a memoir and the general subject matter, one wonders why the sudden rush to publish, and more to the point, why Authonomy/Harper Element left it so long to announce?
Together with this news also comes the announcement that there is a fifth title ‘found’ from the Authonomy piles, but, curiously, details cannot be provided because a contract has not yet been signed. Is this not a tad presumptuous on Harper Collins’ part?
Here is the product information on Terence O’Neill’s Someone to Love Us. 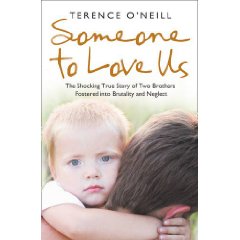 The harrowing true story of the young boy who captured the heart of the nation when he testified in court to find justice against those responsible for his brother’s death. Terry O’Neill was just ten years old when he stood up in court to testify against his brutal foster parents, accused of the manslaughter of his twelve-year-old brother, Dennis. Terry and his brother had been taken into care and moved through many foster homes until they came to live on the Shropshire farm owned by Reginald and Esther Gough in 1945. There they were to suffer brutal beatings and little care or love – they survived as best they could, looking out for each other, until the terrible morning when Terry couldn’t wake Dennis. In a time when the country was united by war and struggle, the case shocked the nation and made headlines around the world. Terry, a small figure in the courtroom, captured the hearts of mothers and families everywhere, and the public outcry against the foster services led to the instigation of the first provisions to protect other vulnerable children from neglect and cruelty. The most famous playwright of the day, Agatha Christie, followed the story and based her radio play Three Blind Mice on the brothers, which she later developed into the longest-running theatre play The Mousetrap.
Terence O’Neill is now 74 years old, and married with children, grandchildren and great-grandchildren. After his time at the Goughs, Terence remained in the care of the local authorities until he was 18. He then joined the Army for several years, before retiring out. He now lives, surrounded by his family, in South Wales.
The Independent Publishing Magazine | TIPM Media
Sharing
Authors