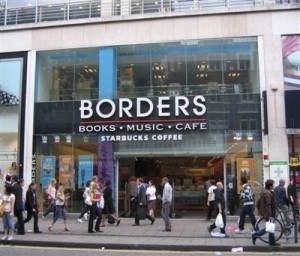 The 45 Borders UK stores will close for good next Tuesday with it looking increasingly unlikely that administrator MCR will find a buyer for the book retailer. Events have become sadly acrimonious in the past week with Hachette Livre taking Borders/MCR to the courts because of non-payment of stock already sold by stores. Over the past few weeks, since Borders UK entered administration, they have been heavily discounting book stocks for sale to the public in an effort to maximize cash intake before Tuesday’s closure. Hachette Livre’s court action has forced Borders to pull the publisher’s titles from their shelves with Peter Roche, Deputy CEO of Hachette Livre claiming other major publishers will follow their lead against the ailing book retailer.

As an aside, Wesley Owen, a Christian bookstore chain in the UK has also gone into administration following the collapse of parent company, IBS-STL.